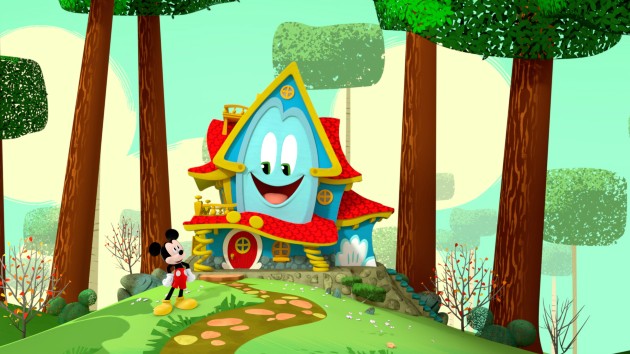 Harvey Guillén cavorts with vampires in the FX series What We Do in the Shadows, but now he’s hanging with a more wholesome cast of characters as part of the new Disney Junior animated series Mickey Mouse Funhouse.

Guillén voices Funny the Funhouse, an enchanted playhouse that magically takes Mickey and friends on all kinds of adventures. The self-proclaimed Disney fan calls the role a dream come true.

“I still can’t put [it] into words,” he tells ABC Audio. “[This] was my childhood dream. If I would have gone back in time and told five-year-old me, like, ‘You’re going to be a Funhouse in Mickey Mouse’s Funhouse,’ I would have not believed myself.”

Guillén hopes the series will bring that same feeling to a new generation of little ones.

He continues, “I love the idea that we’re introducing…that world to kids where we don’t need to get on a plane and go on an adventure, we can stay in our backyard and it becomes a fantasy world.”

Mickey Mouse Funhouse debuts with a primetime special “Mickey the Brave!” on Disney Junior at 7:30 p.m. ET/PT tonight, followed by the series premiere on Friday, August 20 on both Disney Channel and Disney Junior at 8 a.m. ET/PT.