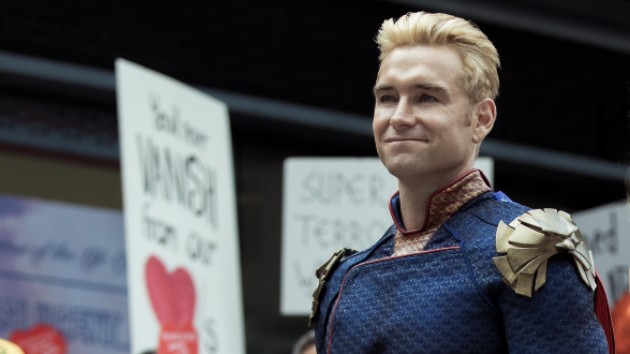 (NOTE LANGUAGE) While Amazon’s skewed-view superhero show The Boys may have been a natural fit for Emmys’ visual effects categories, its nominations Tuesday morning in the Best Drama category turned some heads.

Based on Garth Ennis and Darick Robertson‘s very graphic graphic novel series, the show centers on an Avengers-like group of superheroes known as The Seven — and unlike their Marvel counterparts, most of them are anything but heroic. Opposing them are The Boys: Karl Urban as Billy Butcher and Jack Quaid as Hughie, and their pals — who all have various scores to settle with the not-so-super super people.

For Antony Starr, who plays the megalomaniacal Homelander, the positive reaction from fans and critics to the second season is gratifying. “I got to be honest, it was like pulling teeth through the season,” he tells ABC Audio.

“It was because it was all really new stuff, you know: Homelander parenting and doing all these bizarre things — and also having that character on the back foot was really very weird. And then also any sort of romantic involvement that he gets up to was all really new. And I was like, ‘How do we do that?!"”

Starr allows, “But the end result…has been looked at favorably, which is really nice.”