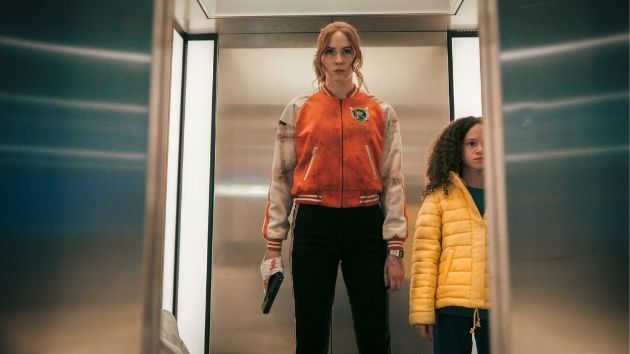 Avengers star Karen Gillan knows a thing or two about action movies, but usually she’s surrounded by a bunch of guys. In her latest film, Netflix’s Gunpowder Milkshake, out Wednesday, she plays an assassin for hire who teams up and kicks butt with a bunch of women, which she tells ABC Audio was awesome.

“I mean, truly, that was just the best experience ever,” Gillan gushes. “I never realized how rare it is to actually have that many women in the main cast. And so we just had so much fun.”

“I mean, we were having girls nights and wine and laughing. And it was just like, oh, this is just brilliant. I want to do this all the time,” she laughs.

Angela Bassett and Carla Gugina, who kick butt alongside Gillan in the action-packed film, echoed the same sentiment about the vibe on set.

Gugino says, “There is no doubt something about a female energy that with that many women around that was super organic and peaceful.”

“Collaborative, supportive,” Bassett adds. The actress, also shares that she left filming with “a little tweak” in her ankle that serves as “a little reminder of the good time I had in Berlin.”

“To this day [it] still clicks and clicks and clacks a little bit as I walk or when I’m accelerating driving,” she reveals.

If it already wasn’t obvious by the name, Gunpowder Milkshake utilizes guns in the film but when it comes to glorifying guns or gun violence, Gillan says, “I certainly don’t want to be promoting that in any sense, but at the same time, like it was authentic to the characters. And it is a movie and it’s not a realistic movie.”