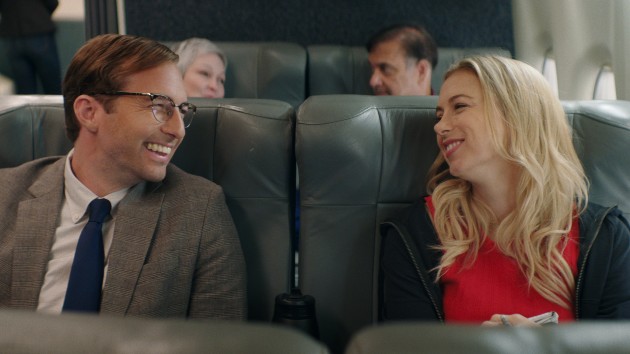 Iliza Shlesinger‘s new movie Good on Paper starts off like a typical rom-com — a girl meets and falls in love with the seemingly perfect man — and ends with a revenge fantasy.

The Netflix film is based on the comic’s real-life dating horror story.

“This is a true story about a sociopath that I was friends with, that I dated, and the extent of the fully insane lies [he told me] that are actually very believable,” Shlesinger, who penned the script, tells ABC Audio of her “rom-con.”

The stand-up comic and actress says her ex — played by Ryan Hansen in the movie — built their entire relationship on lies, from his being a Yale graduate to his mother being diagnosed with cancer.

Shlesinger ended their relationship after learning of his dishonesty, but admits the movie’s ending differs from reality.

“Not everything on the screen happened to me… but about two thirds of it,” she said, adding she crafted the alternate ending because, after sharing her story in her stand-up routine, a deluge of fans came forward with their own horrific experiences.

“This [ending] is… for people who have ever been unjustifiably [and] brutally screwed over in a way that you didn’t deserve,” remarks Iliza. “It was cathartic to write it, but the ending was a little bit of vindication on paper.”

Shlesinger also explained why she dared to turn her story of heartbreak into a feature-length film.

“I’m shedding light on this because it’s a crazy story and I made it into something funny. But it actually is super pervasive in our culture and nobody talks about it because it’s so embarrassing,” she quipped. “I’m here to say you don’t have to be embarrassed.”