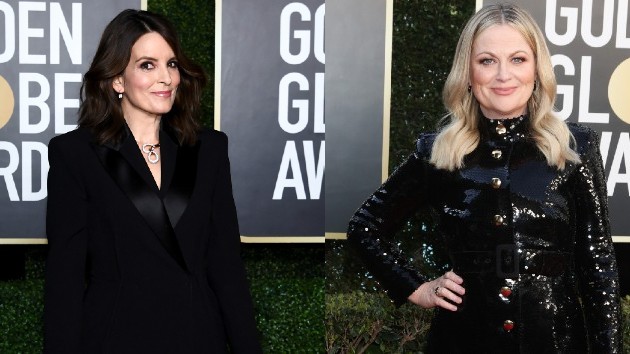 (LOS ANGELES) — Instead of speaking to crowds of celebrities dressed to the nines for the 2021 Golden Globes, hosts Tina Fey and Amy Poehler ushered in the festivities to a room full of “smoking hot first responders and essential workers.”

The two took aim at the Globes’ recent scandal, where a study found that the Hollywood Foreign Press Association doesn’t have a single Black member, with the two joking that the HFPA consists of a hot dog with a face drawn on it, several cats and a ghost.

The ladies also ribbed several of this year’s nominees, with Fey joking Netflix’s The Prom came out at the perfect time — when high schoolers are unable to attend the festivities but can watch a movie where James Corden and Meryl Steep attend one, instead.  The flick is nominated for Best Picture – Musical/Comedy.

The biggest burn was saved not only for the HFPA, but for Sia’s Music, which is also up for Best Picture – Musical/Comedy.

“Music is nominated for best international flopperooni,” said Fey. “I don’t want to get into it guys, but it’s really problematic.  And Twitter is saying it’s the most offensive casting since Kate Hudson was the Weight Watchers’ spokesperson.”

Music has been criticized for hiring a non-autistic actress to play a non-verbal character who is on the spectrum.

Poehler then addressed the HFPA controversy, saying, “Everybody is understandably upset with the HFPA and their choices. Look, a lot of flashy garbage got nominated, but that happens — that’s like, their thing. But a number of Black actors and Black led projects were overlooked.”

It led the two to determine that “awards shows are stupid” and that they “are all a scam, invented by Big Red Carpet.”