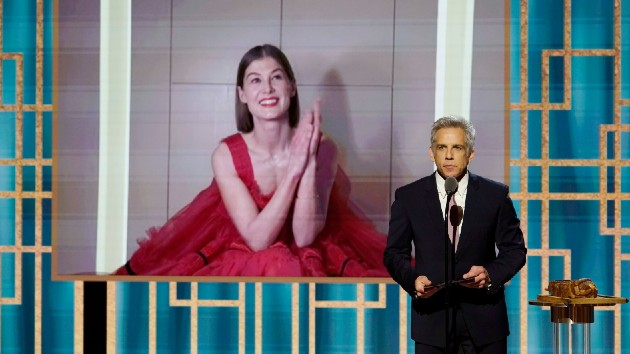 (LOS ANGELES) — Rosamund Pike took home the award for Best Actress in a Motion Picture Comedy or Musical for I Care a Lot at the 2021 Golden Globes on Sunday.

This is the first Golden Globe for the British actress who won over her fellow talented actresses including Maria Bakalova in Borat Subsequent Moviefilm, Kate Hudson in Music, Michelle Pfeiffer in French Exit, and Anya Taylor-Joy in Emma.

Pike excitedly accepted the award, “Wow. I bet it looks like I care a lot. I do!” She also took a jab at Rudy Giuliani saying that having to swim out of a sunken car was better than being in a room with him — a nod to Bakalova’s scene in the Borat sequel.

I Care a Lot is a dark thriller/comedy that hit Netflix on February 19. The film follows con-artist Marla Grayson, portrayed by Pike, who makes a living by gaining guardianship over senior citizens and selling their assets for profit.