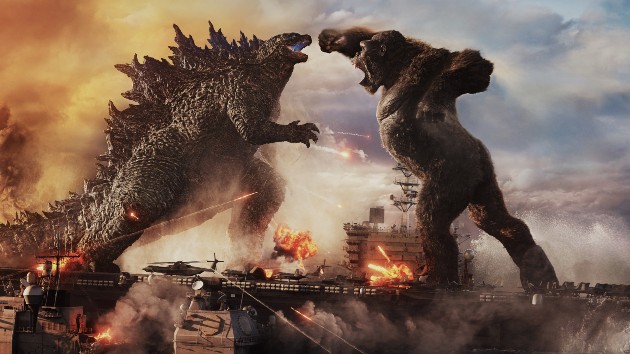 (LOS ANGELES) — Talk about rolling in the dough — after the Easter holiday weekend Godzilla vs. Kong has brought its worldwide box office totals to a massive $285.4 million.

The highly anticipated blockbuster, which stars Alexander Skarsgard, Millie Bobby Brown, Brian Tyree Henry and Rebecca Hall, was released in theaters internationally on March 24 and in the United States on March 31.  Its North American haul over its first five days in theaters stands at $48.5 million.

The fourth installment in the Legendary Entertainment’s monster universe — following Godzilla, Kong: Skull Island and, most recently, Godzilla: King of the Monsters — is now being shown in 3,064 North American theaters and is available free of charge to subscribers of the HBO Max streaming service.

Coming in second in the box office was newcomer The Unholy, which opened to a modest $3.2 million, narrowly besting the action movie Nobody, now on its second week in theaters.  The Bob Odenkirk-led film’s box office run now stands at a collective $11.8 million after earning $3 million over the holiday weekend.

Disney’s animated Raya and the Last Dragon slipped into fourth place and earned an additional $2 million.  The film is simultaneously available on the Disney+ streaming service for a premium fee of $30.  Disney is the parent company of ABC News.

Closing out the top five was Tom and Jerry, which collected $1.5 million over the weekend, bumping its overall haul to $39.5 million since it opened in theaters six weeks ago.

Tom and Jerry is also available to HBO Max subscribers free of charge.