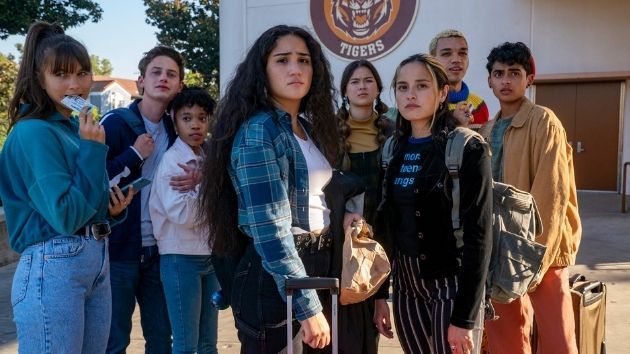 The series, created by 19-year-old Zelda Barnz and her fathers Daniel and Ben, and produced by Lena Dunham, has been compared to HBO’s other buzzy teen drama Euphoria.

Zelda tells ABC Audio the show “is about a group of queer youth in Anaheim who are kind of searching for connectedness, both on social media and in person, in their kind of conservative community, and they sort of just… find each other.”

While not her life story, Zelda says there’s “definitely a lot” of her in the show.

“I did want to see myself and my friends represented authentically on screen, but I definitely would say that the show isn’t necessarily based on my life or my experiences,” she explains.

Adds Zelda, “It’s definitely fiction, but I would say the essence of the high school experience is definitely something that inspired it.

Gener+ation is a family affair, and Daniel tells ABC Audio the stories, many of which involve sex and drugs, made for interesting family dinners

“I could never have imagined having this kind of conversation with my parents,” he says.

“It’s been amazing, obviously, to work in creating the show together,” he continues. “But there has been a whole other level, too, which is just us as a family being able to be more honest and open and communicative with each other as a result of talking about the things that are connected to the show.