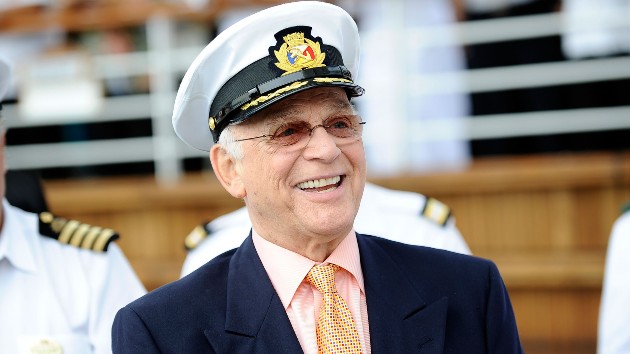 Gavin MacLeod, the star of two TV shows of the ’70s — The Love Boat and The Mary Tyler Moore Show — has died, ABC News has confirmed.  He was 90.

MacLeod’s nephew Mark See confirmed MacLeod’s passing, saying, “He was full of life until the end.”

Born Allan George See, MacLeod appeared in films like Operation Petticoat, I Want to Live and Pork Chop Hill, as well as numerous TV series, before landing the part of Happy Haines on the ABC comedy McHale’s Navy.  He left that show after two years and he continued his film and TV career.  He guest-starred on The Dick Van Dyke Show in 1961, marking the first time he’d work with Mary Tyler Moore.

His breakout role was playing newswriter Murray Slaughter on The Mary Tyler Moore Show: During the show’s 1970-1977 run, he appeared in every single episode and earned two Golden Globe nominations.

MacLeod’s MTM co-star Ed Asner, who played his boss Lou Grant, tweeted, “My heart is broken. Gavin was my brother, my partner in crime (and food) and my comic conspirator. I will see you in a bit Gavin. Tell the gang I will see them in a bit.”

Asner then added, referring to the fact that he and MTM co-star Betty White are the only surviving members of the MTM cast, “Betty! It’s just you and me now.“

When Mary Tyler Moore ended, MacLeod immediately segued into starring on ABC’s The Love Boat as the soon-to-be iconic Captain Merrill Stubing.  The romantic comedy-drama ran for 10 years and earned MacLeod three Golden Globe nominations.  He became the spokesman for Princess Cruises, a role he continued in after the show went off the air.

After The Love Boat, MacLeod appeared onstage and in musicals. He also guest-starred on shows like The King of Queens, JAG, Touched by an Angel, That ’70s Show and HBO’s Oz.

He and his second wife, Patti Kendig, became Evangelical Christians and for 17 years, they were hosts on the Trinity Broadcasting Network. In his 1987 book Back on Course, MacLeod credited the religion for reuniting him and Kendig; the couple had divorced in 1982 but remarried in 1985.

In 2013, MacLeod published his memoir, This Is Your Captain Speaking: My Fantastic Voyage Through Hollywood, Faith & Life.

According to Variety, MacLeod is survived by Kendig and four children from his first marriage to Joan Devore.