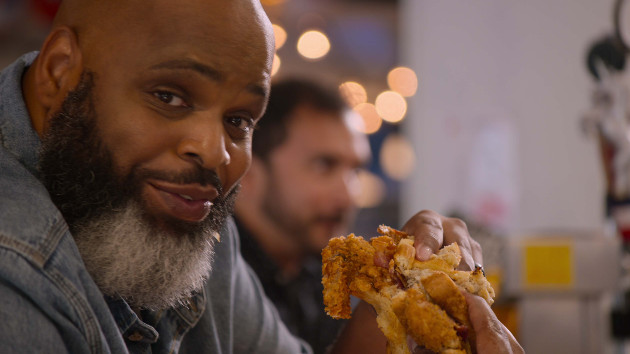 As a culinary expert, Daym is known for his honest and often over-the-top reviews. However, the self-described #FoodTitan tells ABC Audio that, just because he’s open minded when it comes to trying different foods, it doesn’t mean he’s pleased with every meal he eats.

“They had nothing to do with an oyster. I can tell you that much,” he continues. “When you experience a part of an animal that you never thought you’d experience before — it’s going to change you as a person on the inside.”

Although Daym admits he was “reluctant” to chow down on that part of a bull’s anatomy, he says he felt the need to power through it because he didn’t want to have any regrets.

“I wanted to have a moment where I’ve done something that I told myself I wouldn’t do,” he explains. “You can’t talk about becoming a food critic if you shy away from all the food that’s out there. And I can’t tell you about experiences if I don’t experience it for myself.”

“So I can put it in my little checklist of things that I didn’t even know I wanted to do, but [wanted to] elevate the taste buds a little bit,” he says.