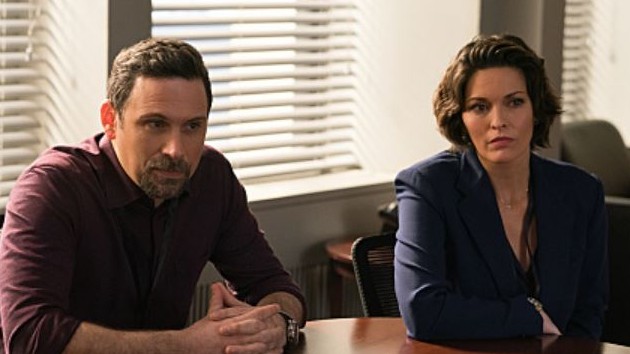 Jeremy Sisto and Alana De La Garza first worked as, respectively, the Law and Order elements of Dick Wolf‘s Law & Order, and now they can be seen on the same team in CBS’ hit drama FBI.

“It’s funny…you’re always the first day of a job like, OK, you know, ‘I hope everybody’s cool and everybody likes me.’ And it was really like I just kind of came home. It was like a family.”

She added of her former L&O co-star, “Of course, Jeremy, it was so great to see him. And I missed him…You start jobs…and…you’re hanging out all the time and your families are hanging out and suddenly [you’re on different shows and] don’t get to hang anymore. And you’re like, ‘Wait, where’s my peeps?"”

Tonight’s episode has the FBI agents tackling a mass casualty incident at a New York City restaurant. As always, Sisto’s character will seen coordinating a team of agents thanks in no small part to his character’s omnipresent Bluetooth earpiece.

Of that accessory, Sisto had to laugh. “I think it’s actually good for my hearing because I spend a whole week with one ear…clogged up. So this hearing gets [better on the opposite side], you know, and then…I have to switch it…Yeah, it is a bit of a problem.”