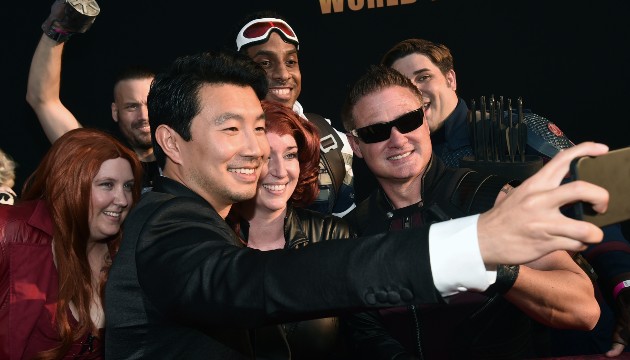 Most actors have to grind away at day jobs to make ends meet before finding fame, and Shang-Chi star Simu Liu is no exception — as proven by a host of stock photos one fan uncovered.

Liu, who also appeared on the beloved comedy series Kim’s Convenience before Marvel came calling, was once one of any number of people you see in stock photos, toiling away in fake offices and doing other random stuff.

One fan spotted Liu, and compiled some of the stock photos in which he appears. Buzzfeed then took notice, reposting the pics. Sure enough, there’s Marvel Studios’ newest superhero — currently riding high after a record $90 million Labor Day opening — looking psyched as he points out something on a computer to his office “colleagues,” leads a “presentation,” and cheats a look to the camera as some other people are looking over paint swatches … or something.

And because the Internet, fans had some fun with the images, with one Photoshopping Simu from his stock photo into a meeting with the Avengers from Captain America: Civil War, among others.

“Shang-Chi and the Legend of the Ten-Ring Binder,” another commented.

“HEY!! We all start somewhere!” one person added.

Liu himself even got in on the fun, repurposing the shot of him pointing at something on his laptop: “Me laughing at the people who thought we’d flop,” he snarked.

As actors always say, you’re always one role away from stardom, and here’s your proof — or proofs, as it were.

This stock photos of Simu Liu are so funny help #$&@* pic.twitter.com/08bDdOY5kS

Me laughing at the people who thought we’d flop pic.twitter.com/7UoLqRXlCJ

Diego Luna says ‘Andor’ explores the “nuances” of his ‘Rogue One: A Star Wars Story’ character