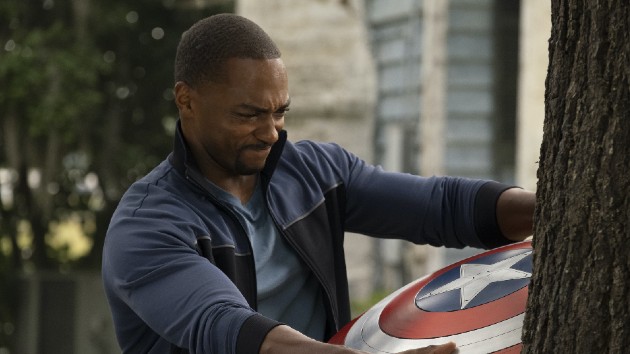 (NEW YORK) — (SPOILER ALERT) The Falcon and The Winter Soldier debuted on Friday, and the surprise return of MCU veteran Don Cheadle as Rhodey played an important part.

The series deals with the heavy issue of Mackie’s Sam Wilson, a Black man, taking up the mantel and shield of Captain America. Head writer Malcolm Spellman told ABC Audio why it was so important to have Cheadle’s and Mackie’s characters discussing why Wilson doesn’t think he’s worthy of it.

“One of the reasons we picked Rhodey for that scene is that there is no hiding from the fact that you have a Black man dealing with the Stars and Stripes,” Spellman says.

“And as you saw in the pilot, everyone thinks it’s going to go with Sam grabbing that shield and flying off into battle. But no, he has decided he is Black and he knows he’s Black and he knows that there’s a lot of baggage that needs to be dealt with and it might not be appropriate for him to deal with it.”

“Putting Rhodey in there more than anything we could write — to have two Black men in this moment does a million things for us, you know what I’m saying?”

Like it Marvel Comics has done throughout its history, Marvel Studios doesn’t shy away from issues of race in America, Spellman says.

“We knew after Black Panther that the Marvel fans would allow us to have certain conversations as long as we keep it fun. And thank God for that movie, and thank God for the ‘Killmonger Was Right’ hashtag because it proved these stories can be of the moment…”

A new episode of Falcon and The Winter Soldier drops Friday on Disney+.