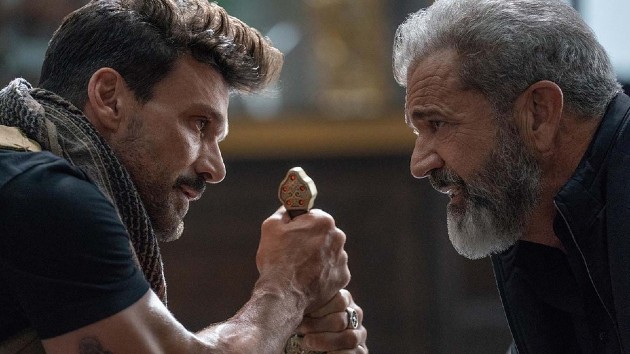 “The one fight I had with Mel — you would think it would be, but he’s not really comfortable with striking,” says Grillo, an accomplished boxer, to ABC Audio.

“And so I said, ‘Mel, when you throw the punch…make sure you don’t lean in because you’ll catch me.” And the first punch he throws, he comes around and he elbows me in face. Now he’s got Popeye forearms,” Frank recalls with a laugh.

Grillo says, “[W]e had to get somebody onto set, stuck her hands in my jaw — white, I mean, white-out pain — and had to…click it back into place.”

“But listen,” the Gibson fan says with a laugh, “At least it was Mel.”

Carnahan jokingly recalls the moment, laughing, “Frank came back like [mumbling] “That’s it for me. I’m done! I’m done!”

Laughing, he adds sarcastically of his friend, “I mean, you know, the fact Grillo couldn’t talk for 30 seconds, was not breaking anybody’s heart. It was kind of like, ‘Guys, we sure? Are we sure we want to reset his jaw? Maybe we just take a beat. Let’s think about this."”

There was another bright side. “I put that shot in the movie, you know, so. So it worked!”