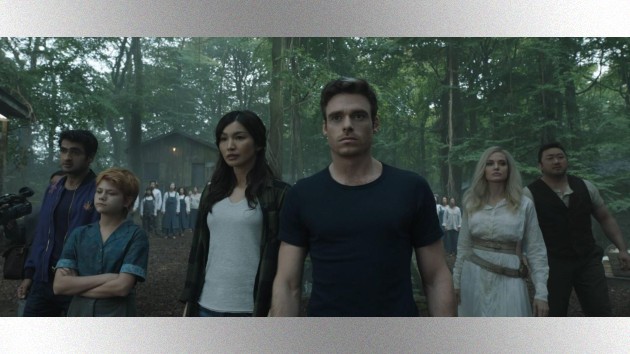 Marvel Studios’ third release of the year, Eternals, is currently running second place in terms of ticket pre-sales for 2021, according to Fandango.

Pre-sales for the film, which comes out Friday, are outpacing those for September’s Shang-Chi and the Legend of the Ten Rings, but behind the year’s advanced sales leader, July’s Black Widow.

While the former film was only released in theaters, the latter was released both in theaters and on Disney+ Premiere Access.

Fandango also polled its users about Eternals ahead of its release, and found 98% were “excited to see the Marvel Cinematic Universe expanding with new characters,” while 97% were “looking forward to seeing a different kind of Marvel Studios movie.”

Ninety-four percent of those polled said they wanted to see the globe-spanning movie’s use of real locations, and 81% were “curious” to see Nomadland Oscar-winning director Chloe Zhao‘s take on the superhero genre.

“The end of one era is the beginning of another,” narrates Arishem, the movie’s powerful antagonist.

Real life vs. ‘Real Time’: Bill Maher on letting his hair down with his ‘Club Random’ podcast