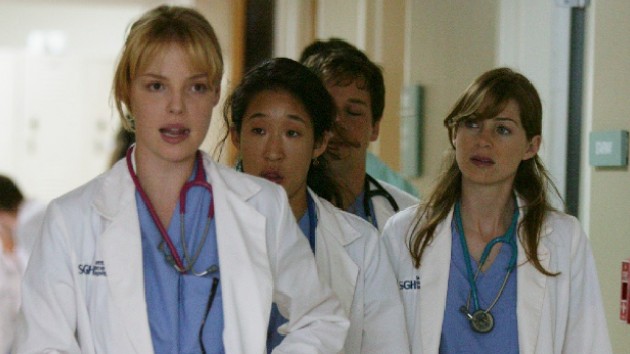 (NOTE LANGUAGE) Ellen Pompeo is opening up about the time commitment Grey’s Anatomy has required over the years, and her former co-star Katherine Heigl‘s previous remarks about it.

While speaking with her Grey’s co-star Kate Walsh on a recent episode of the Tell Me with Ellen Pompeo podcast, the actresses discussed the long hours the cast and crew have devoted to the show, and how that’s changed over the years.

“I’m very lucky now with my schedule on Grey’s, I get to cut back and overall I’m happy for the production as a whole because we have cut back tremendously,” Pompeo said. “I mean, back in the day we used to do crazy, crazy hours and that alone will make you insane.”

Pompeo then referenced comments their former co-star Katherine Heigl, who portrayed Dr. Izzie Stevens on the show, made about her time working on the medical drama.

“I remember Heigl said something on a talk show about the insane hours we were working but she was 100 percent right,” Pompeo said. “And had she said that today, she’d be a complete hero. But she’s ahead of her time — made a statement about our crazy hours and of course, let’s slam a woman and call her ungrateful.’”

“When the truth is, she’s 100 percent honest and it’s absolutely correct what she said and she was f****** ba**sy for saying it,” the actress continued. “She was telling the truth. She wasn’t lying.”

Heigl, who famously left the series during its sixth season in 2010, decried the medical drama’s work hours during a 2009 appearance on The Late Show With David Letterman.

She called “a seventeen-hour day…cruel and mean,” adding, “I’m going to keep saying this because I hope it embarrasses them…”