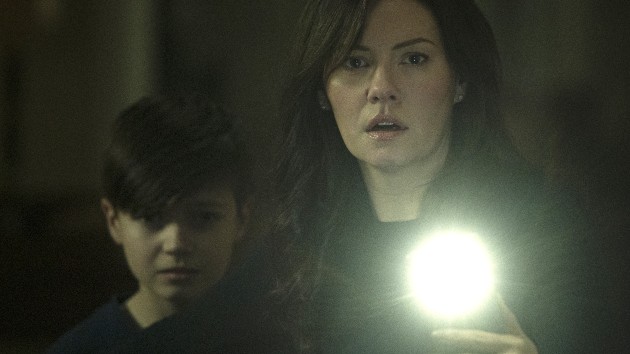 24 veteran Elisha Cuthbert plays a mom who loses her teen daughter to the mysteries of the basement of a supernatural old Irish mansion in the new thriller The Cellar.

Based on writer-director Brendan Muldowney‘s award-winning short The Ten Steps, the film hits theaters and starts streaming on the Shudder app today.

Cuthbert’s character handles marketing for social media influencer teenagers, but as the film begins, it’s apparent that she’s disconnected from her own daughter, Ellie.

“[My character lives] sort of this distracted lifestyle that we’re all so used to now, and…sort of losing sight of your children sometimes,” Elisha explains. “And so when you see my character…and her daughter at the start of the film…it’s a sort of very tumultuous relationship…which makes…losing her even more difficult.”

The film was shot in an actual creepy mansion in Roscommon, Ireland. “It ended up becoming another character in the film,” the actress notes.

“Being at the same location really felt like it had its own presence in the film. That is undeniable,” she teases.

Speaking of scary, ABC Audio wanted to know what Elisha thought about her former co-star Paul Dano, from 2004’s The Girl Next Door, and his freaking out fans and critics in The Batman.

“To see him play the Riddler, I mean, his career has just been so stellar, and yeah, he’s a brilliant actor,” Elisha says.

She adds, “And even when we were doing The Girl Next Door, I mean, he was so charming and so fun to work with. All those guys were. That movie was such a great experience…and it’s one of those sort of cult things now. But yeah, love Paul!”