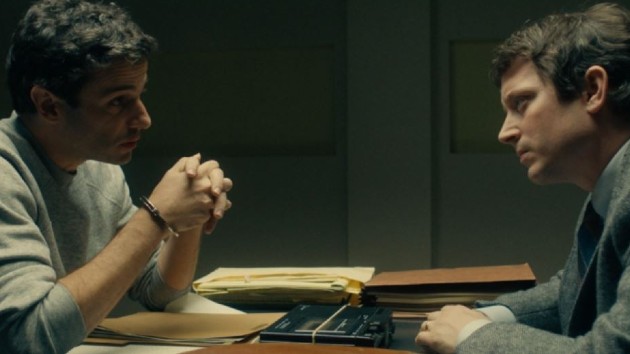 Elijah Wood stars as FBI profiler Bill Hagmaier in the new based-on-real-life drama No Man of God, which hit theaters and streaming services over the weekend after its Tribeca Film Festival debut in June.

The intense movie, directed by actress-turned filmmaker Amber Sealey, centers on the relationship that developed between Hagmaier and an incarcerated Ted Bundy leading up to the serial killer’s execution.

There have been several films about Bundy due to an ongoing national obsession with the killer, in part because his TV-ready looks and charm belied his brutal killings. But Sealey says she was careful not to glamorize him.

Emmy winner Luke Kirby plays the infamous murderer in No Man, and he explained to ABC Audio what his process was to get into Bundy’s head.

“Reluctant,” Kirby sighs. “…I found a lot of things to get distracted by and…I moved in and out of it as much as my stomach could bear for the day.”

Kirby credited Sealey with making his job easier. “…To come into a room and play make believe for a job is, you know, ridiculously fortunate. So I tried to keep it all in perspective.”

For his part, Wood was relieved by the mood on Sealey’s set, the first time many involved had worked since the COVID lockdowns. “I think what was sort of surprising about it was…the material is heavy…but the experience of making it was joyful and fun, partially because we all hadn’t been working on anything in quite some time, and we’d been in isolation.”

Wood continues, “And suddenly we were engaged in the creative process again, which was lovely. But also, you know, it’s Luke and Amber and this incredible crew that made the process fun and enjoyable.”