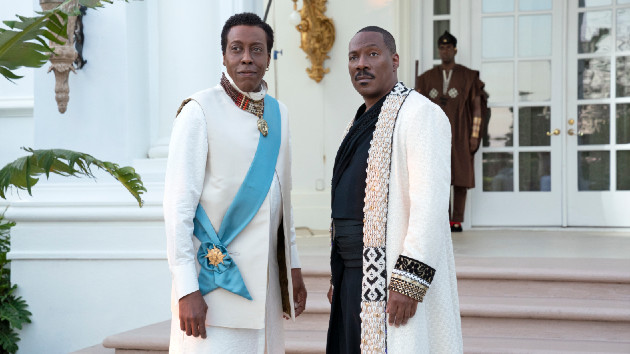 (NEW YORK) — It took Eddie Murphy roughly three decades to do Coming 2 America, the sequel to his 1988 hit comedy. Looking ahead, Murphy tells ABC Audio that fans won’t have to wait so long for another installment.

“We have a story for part three of this movie that would be really funny and clever, but… I have to be seventy-five,” he jokes. “I’m dead serious. Sixteen years and we’ll do part three.”

While Murphy, who reprises his role as Prince Akeem, promises it will take half the time to put out another Coming to America, he shares that the Queens barbers won’t be in the film because no one would ever believe they’re “still alive.”

However, one character that will be back is Murphy’s infamous “Sexual Chocolate” band leader — Randy Watson.

“He’ll be terribly old and I’ll be 75,” he quips. Murphy’s co-star Arsenio Hall laughs, adding that the potential sequel will have “Morgan Freeman playing [Eddie’s] son.”

Jokes aside, some of the cast are seriously contemplating the third installment.

“It would [be] so awesome to just be in the market and watch Zamundan locals,” says Nomzamo Mbatha, who plays royal groomer Mirembe. “Because that’s how you’re going to get all the drama and all the comedy as well. It would be funny to see Eddie and Arsenio as locals.”

“Her character has so much depth there that I would love to see what the third Coming to America would look like for her,” he says. “I think they built such a beautiful foundation for all of these characters and you can go anywhere with them.”