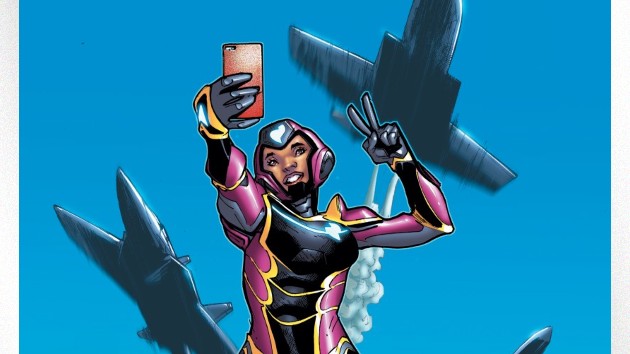 Marvel fans will get a chance to see Dominique Thorne before she officially stars as Riri Williams in her highly anticipated Disney+ series, Ironheart.

First created by Brian Michael Bendis and Mike Deodato Jr., Riri was first introduced in Marvel Comics in 2016 as a 15-year-old MIT student who designs a suit of armor similar to Iron Man’s. Tony Stark takes the young inventor under his wing, and eventually gives her an Iron Man suit of her own.

However, since Robert Downey, Jr.‘s Stark is dead in the MCU, the Wakanda Forever connection would likely see Riri catch the attention of Letitia Wright‘s Princess Shuri, Wakanda’s resident tech genius, and one of the smartest people on the planet, according to the Marvel Universe.

Not only was Shuri tasked with heading up the Wakandan International Outreach Centre in Los Angeles at the end of Black Panther, but the character had toyed with her own Wakandan Iron Man-style suits, as seen in the interactive Avengers: Damage Control experience which was co-produced by Marvel Studios.

Black Panther: Wakanda Forever is set to hit theaters on July 8, 2022. Ironheart does not yet have a premiere date.