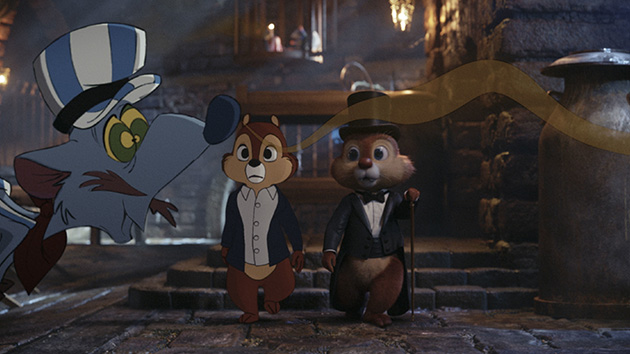 The Lonely Island‘s Akiva Schaffer directed the film, tells ABC Audio that its mix of live-action and animation “allowed for this Roger Rabbit world,” but on a whole new level.

“There’s been 30 years of technology that has changed animation so much with so many different styles,” he explains, “and the fun of getting to see them all together was really enticing to me.”

Akiva says that like Roger Rabbit, the movie features so many animated characters and Easter eggs, animation fans are going to go crazy — and it’s not just Disney.

“Third party characters that aren’t Disney was super important because, you know, Roger Rabbit had like Looney Tunes and all that stuff and it felt so much bigger because of that,” he shares. “So in the same way, to keep it from feeling like a Disney+ ad and to just be a love letter to animation. So it was the lawyers deserve, you know, a big bottle of wine.”

Kiki Layne is one of the only humans in the movie, and the The If Beale Street Could Talk and Coming 2 America star says acting alongside a bunch of animated animals brought her back to her early days.

“It’s just fun to play make believe. Like, you know, it took me back, You know, even the fact that I was acting by myself, I thought, yeah, that’s what I used to do in my bedroom,” she reveals. “You know, I take my Barbies and stuffed animals and create a whole new world in my bedroom. That’s where it starts.”