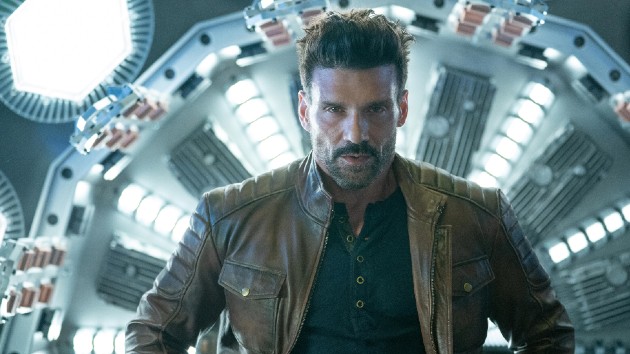 (NEW YORK) — Writer-director Joe Carnahan exploded onto the scene with the tense 2002 drug drama Narc, and has consistently been the go-to guy for gritty action films like 2006’s Smokin’ Aces with Ryan Reynolds and Common, and 2011’s The Grey with Liam Neeson.

The film, sort of a Groundhog Day with guns, has Grillo playing an ex-Special Forces soldier who keeps reliving the same day until he unravels a potentially world-ending secret.

Carnahan first read the script from Chris and Eddie Borey years ago, before he decided to put his own stamp on it. He was inspired by the work of Top Gun and True Romance director, the late Tony Scott, who died by suicide in 2012.

“It was sci-fi, and I’m not really a sci-fi guy,” Carnahan says of their script.

“But Tony Scott, my dearly departed mentor, who I just thought the world of, you know, he had done Deja Vu [with Denzel Washington] around that time [2006]. And it was kind of this really brick and mortar look at time travel. And I thought, well, that would kind of be the style I would do it. And I wouldn’t want anything overtly science fiction because I just don’t think that’s my wheelhouse.”

Carnahan adds of Boss Level’s star, “I [had] just worked with Frank on The Grey and I wanted to do something with him. And I thought this is kind of an ideal, this piece, because I just think the guy — he looks like an action hero.”