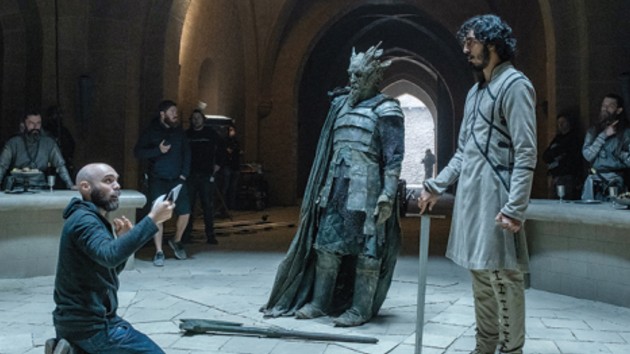 Today, the picturesque, trippy drama The Green Knight hits theaters. In the adaptation of the famed medieval tale Sir Gawain and the Green Knight, writer-director David Lowery has Slumdog Millionaire’s Dev Patel playing Gawain, the nephew of King Arthur, who wants to prove himself to the king.

To that end, when a mysterious, monstrous, truthfully Groot-like knight strides into the king’s court and offers any worthy man a mysterious challenge, Gawain seizes his chance.

His choice sends him on an epic quest of self-discovery, in which he encounters ghosts, bandits and a mysterious castle full of temptation, and ultimately finds out if he’s worthy.

Patel and co-star Joel Edgerton, who plays a lord Gawain encounters on his quest, praised the Ghost Story director for bringing the haunting tale to life. “Everything is so considered in the film you know, down to every thread in that costume,” Patel tells ABC Audio.

“You’re part of this great visionary’s composition, and every frame really was a painting. It’s a process of submission in a way,” he continues, adding with a laugh, “I trusted him so much that you kind of just submit yourself up to the experience and let a great director and the wilderness in Ireland do the rest of the dictating in a way.”

Patel says of seeing the film for the first time, “My breath was taken away.”

Edgerton agrees. “I kind of blew my mind, actually,” he notes. “I was expecting no less, but I got a lot more than I was expecting…It just feels like a constantly evolving painting.”