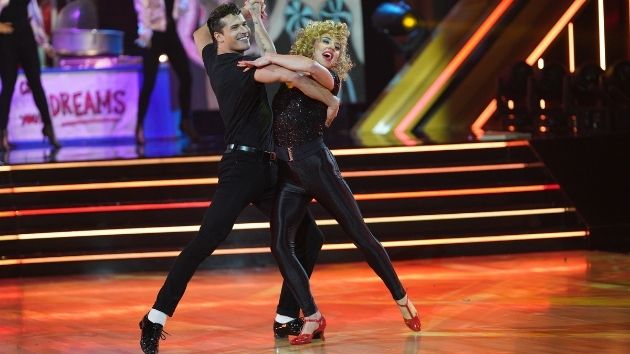 The cast of Dancing with the Stars celebrated one of America’s most beloved movie musicals — Grease — on Monday and the night included several surprise cameos from the original cast… as well as a shocking goodbye.

Judge Len Goodman was forced to deliver yet another tie-breaking vote at the end of the night after the audience sent Spice Girl‘s Melanie C and influencer Olivia Jade into the bottom two. Len sided with fellow judge Derek Hough to spare Olivia, overruling Carrie Ann Inaba and Bruno Tonioli who opted to save the British singer.

Despite the painful goodbye, the night provided plenty of highlights.

Olivia Newton John, who played Sandy in the 1978 film, opened the show with a special dedication to the cast and crew.

Frankie Avalon belted out “Beauty School Dropout” in the 1978 feature, performed the standout hit on the ballroom floor as Amanda Kloots danced the Viennese waltz.

JoJo Siwa earned the season’s first perfect score. The actress nailed her foxtrot to “Look at Me I’m Sandra Dee (Reprise),” which brought Goodman to his feet to compliment the “superb” routine.

The night also saw Real Housewives of Atlanta star Kenya Moore‘s big comeback!  The reality star shook off the sting of almost being sent home for the past two consecutive weeks and earned her first straight set of 9s for her sensual rumba to “There Are Worse Things (I Could Do).”

Dancing with the Stars returns with a spooky vengeance next Monday at 8 p.m ET on ABC, celebrating all things Halloween! Of course, that also means social media is ablaze over what — and how many — outfits host Tyra Banks will change into over the course of the night.