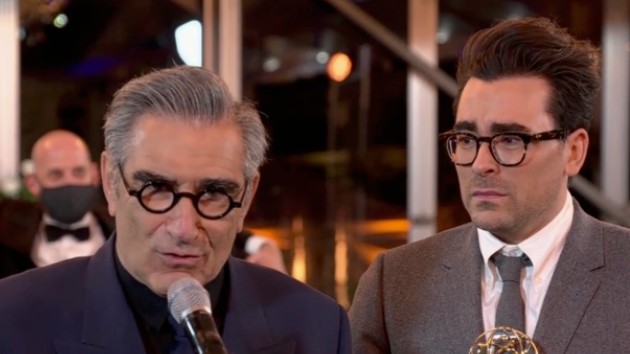 Dan Levy found himself dispelling a rumor claiming that his father Eugene Levy had died.

The report popped up over the weekend when a supposed fan of their hit comedy Schitt’s Creek wrote in a since-deleted tweet, “Eugene Levy was such a gift.  It’s so sad to watch knowing he is no longer here.”

The three-time Emmy winner personally reacted to the gossip by shutting it down with a succinct, “News to me.”

The supposed fan is now apologizing for sparking the fake news and explained that she somehow thought the 74-year-old actor had died.

“I stupidly thought Eugene Levy had passed away last year,” the Twitter user explained. “I am watching Schitt’s Creek for the first time, & was super sad because Eugene is such a gift. I deleted the original tweet because I was mortified & also didn’t want anyone to think it was true now that I know he’s ok.”

She also added in a followup tweet, “Everything has been such a blur the last year. I’m happy to know he’s fine. I’m so embarrassed.”

Levy, 37, has yet to respond to the apology.

Dan and Eugene Levy’s last major public appearance was during the April 4 Screen Actors Guild Awards, where their comedy collected two of the five trophies of which it was nominated.