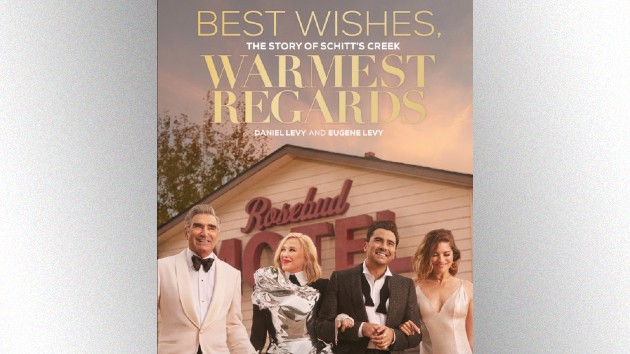 Just in time for holiday gift giving, Dan Levy and Eugene Levy are putting their stamp on a love letter to fans of their nine-time Emmy winning creation Schitt’s Creek: a coffee table book.

Best Wishes, Warmest Regards — The Story of Schitt’s Creek will be available on October 26.

According to Black Dog & Leventhal Publishers, “This beautifully produced, keepsake coffee-table book is the ultimate celebration of the series, the town, the characters, and the state of mind that is Schitt’s Creek.”

Calling the 368-page work “a gift to fans everywhere who have made the show their own,” Best Wishes captures, “the essence and alchemy of all six seasons of what is now considered to be one of the most groundbreaking comedy television series of the last decade.”

The photo-packed book will include character profiles from the Rose family — Johnny, Moira, David and Alexis — as well as of all of the characters that populate the show’s titular town.

The book will document special moments in the town’s history and of the Rose family, and will also include “special features such as the complete, illustrated catalogs of David’s knits and Moira’s wigs, Moira’s vocabulary, Alexis’s adventures, and behind-the-scenes moments from Dan and Eugene Levy and the cast of Schitt’s Creek.”

Not bad for a coffee table book that only costs around $40.