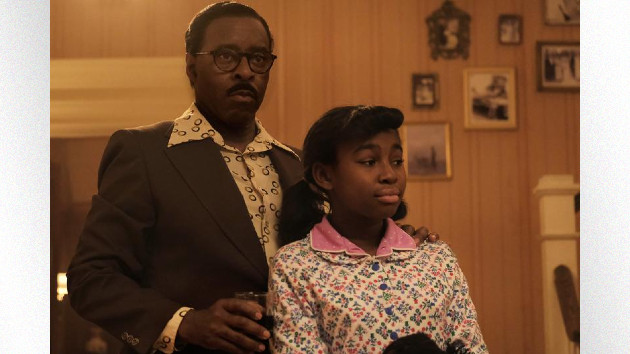 (LOS ANGELES) — Courtney B. Vance shares a rare side of himself in the upcoming anthology series Genius: Aretha.

“We’re gonna hear some singing from me, so I definitely had to flex the cords and get my lung capacity and my endurance up,” he says. “Because you’re doing things seven and eight and 10 and 20 times and from different angles.”

“So by the time you’ve finished — I’m drenched,” Vance explains. “And then we got to get ready for the next one… But it was a wonderful challenge.”

His unique challenge, Vance explains, had a lot to do with tapping into C.L.’s intense persona, which he calls a “force of nature.”

“C.L. was his own universe,” Vance says, before adding that Mr. Franklin was also very different from his other pastor role of Reverend Henry Biggs in 1996’s The Preacher’s Wife — which starred the late great Whitney Houston.

“Reverend Biggs… was just trying to hang on and figure out what the heck was going on in his marriage and his church [and] bring everything together,” Vance says. “But C.L. dominated every room he was in.”

Still, the Emmy-Award winner says C.L.’s story in Genius is a relatable one.

“It’s the same journey,” he says. “These folks came up from sharecropping in the Deep South and came to these towns… Memphis and then into Detroit… by force of his own will and charisma [and] turned himself into a national figure: the singing preacher.”

“He was the superstar until he pushed his daughter out [in front]… because she was a prodigy. She was a ‘genius,"” he quips.