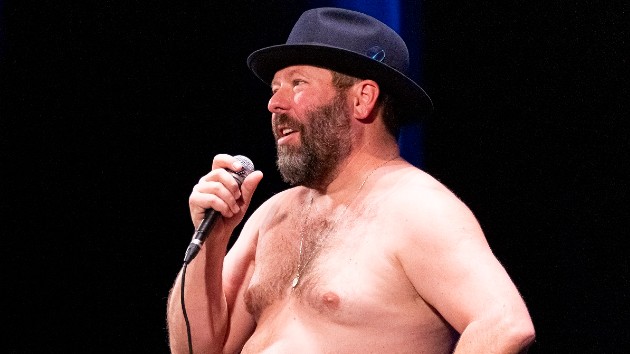 In a video spoofing Cruise’s recent skydive thank you to fans for watching Top Gun: Maverick, Kreischer was filmed partially hanging out of a moving SUV, wearing only roller skates, a helmet and a red Speedo.

Just as Cruise did to Mission: Impossible director Christopher McQuarrie before the actor/producer’s skydive, Kreischer asked The Machine’s producer if he wanted to join him in a planned stunt. “F*** no,” he replied.

However, it didn’t go as well as Tom’s gag: As soon as Bert sets his skates onto the pavement, he screams in pain. “We just ran over my foot. Stop the car!”

As they inspect the broken roller skate, Bert says, “I definitely think I broke my toes,” and urges the driver to go to an urgent care facility.

Aping Cruise, the comic says, “It’s been my honor and privilege to entertain you. I’ll see you at the movies,” referring to the Memorial Day release, before hopping backward, pretending to skydive.

The Machine will have Mark Hamill playing the comic’s father, who gets kidnapped by Russian gangsters after Kreischer’s character gets accidentally mixed up with the Russian mob.

The film is based on Kreischer’s viral, autobiographical stand-up routine detailing a college trip to Russia after he signed up for what he thought was a Spanish class.

Long story short, armed with booze and only a sentence worth of semi-usable Russian, he ended up befriending Russian mobsters.