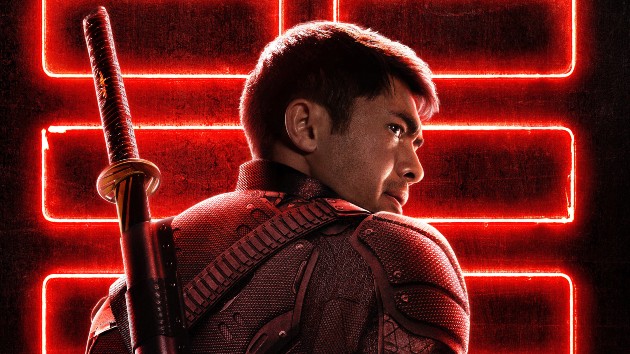 Crazy Rich Asians and Last Christmas heartthrob Henry Golding can be seen in a whole new light, as the titular fan favorite ninja in the new teaser for Snake Eyes: G.I. Joe Origins.

The black-masked, mute assassin had been previously been portrayed by martial artist and Star Wars veteran Ray Park in 2009’s live-action film G.I. Joe: The Rise of Cobra, and its 2013 sequel G.I. Joe: Retaliation.

While according to Joe lore, Snake Eyes’ true origins are a mystery, the action-packed snippet shows Golding’s character being approached by an apparently shady, high-profile figure who seeks to put the ninja’s skills to use.

While the story remains unclear, what speaks more loudly is the action: Golding is seen shooting his character’s trademark Uzi and flipping an enemy’s car, as well as taking part in a death-defying highway sword battle atop a moving car carrier.

Also glimpsed are other classic Joe characters, with Samara Weaving playing the flame-haired heroine Scarlett, Úrsula Corberó as the evil Cobra agent The Baroness, and Andrew Koji as Storm Shadow — Snake Eyes’ blood brother who eventually turns against him.

And of course, we also catch a glimpse of Snake getting his character’s trademark face mask.

And in case you were wondering exactly how popular the heroic ninja is, the teaser got nearly four million views in less than 24 hours.