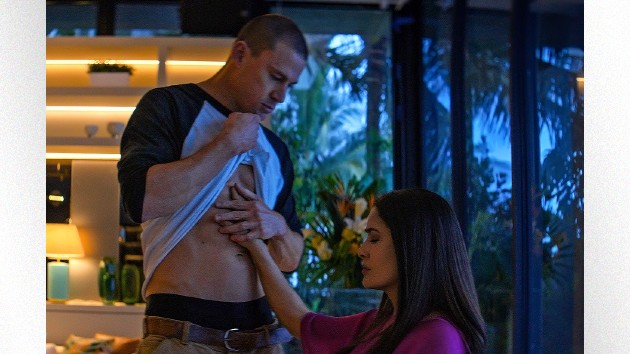 According to the studio, Tatum’s “Magic” Mike Lane “takes to the stage again after a lengthy hiatus, following a business deal that went bust, leaving him broke and taking bartender gigs in Florida.”

It’s there that he meets a beautiful, wealthy socialite played by Salma Hayek Pinault, who asks him if he’s passionate about tending bar. “It’s not really what I do,” Mike replies, before showing her what “he really does”: He performs a sensual lap dance for her and the apparent attraction isn’t just skin deep.

For what he hopes will “be one last hurrah,” according to the studio, Mike heads to London with Salma’s character and learns of her plans to stage a male review not unlike the Magic Mike Live touring show. “With everything on the line, once Mike discovers what she truly has in mind, will he — and the roster of hot new dancers he’ll have to whip into shape — be able to pull it off?”

Judging by the looks of the dancers, by the way, they’re already plenty in shape.

‘Top Gun: Maverick’ is the Best Film of the year, according to National Board of Review

James Gunn on DC heroes’ cinematic fates: “We know we are not going to make every person happy”