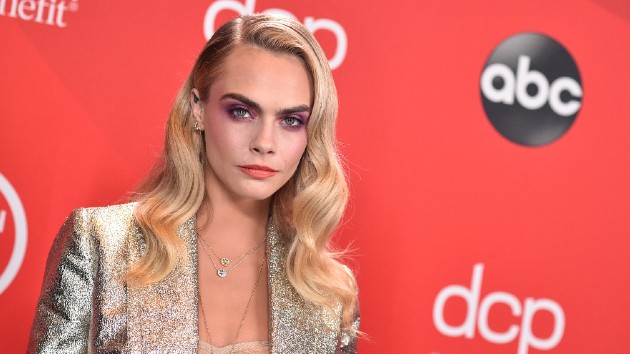 (LONDON) — British actress Cara Delevingne is comfortable in the skin she’s in, but she admits she struggled to come to grips with her sexual identity when she was younger.

Delevingne, who is openly pansexual, chatted Tuesday with Gwyneth Paltrow on The goop Podcast about growing up in an “old-fashioned household” where being straight was the status quo.

“I didn’t know anyone who was gay, or I didn’t know that was a thing,” the 28-year-old actress confessed. “Actually, I think growing up… I wasn’t knowledgeable of the fact that I was probably quite homophobic.”

Admitting she used to be repulsed by “same sex anything,” Delevingne said she internalized and equated being queer to being “disgusting,” so she forced herself to believe she “would never” do anything like that.

So, when she started to suspect she wasn’t straight, it caused her mental health to spiral because of the shame.

“I had a best friend when I was a kid who actually I liked more than they liked me,” the Suicide Squad star explained, saying it triggered “massive depression” and “suicidal moments.”

“I was so ashamed,” Delevingne furthered, noting how her old ideas still have maintained a “complicated” hold on her. “There is still a part of me where I’m like, ‘Oh, I wish I could just be straight.’ There is still that side to it.”

Now, the British actress says she has learned to”love so much and accept” that part of herself, adding she credits her “self-discovery” for giving her the courage to leave her modeling career — an industry she said made her “so unhappy” because “I wasn’t following my truth.”

“That whole thing of just having to fit into the box that feminine,” Delevingne expressed, “I’m an androgynous person, definitely, but I [also] love being a woman.”