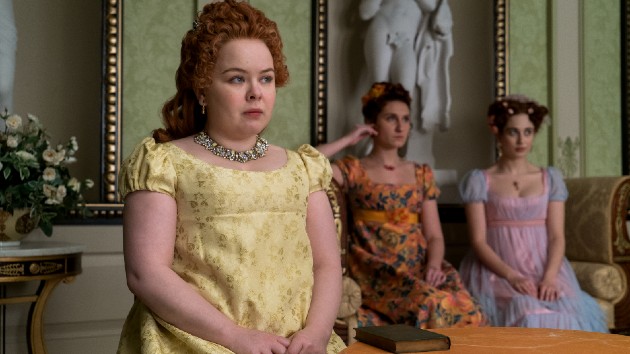 (NOTE SPOILERS) Turns out fans comparing the highly decorated Featherington family, protected by their fierce momma bear Portia, to the Kardashians have been correct all along.

Star Nicola Coughlan, who shined on the series as Penelope Featherington, spilled the beans Tuesday after learning that a prominent member of the Kardashian clan was a fan of the Netflix show.

Tweeting out to Kim Kardashian, the 34-year-old Irish actress declared, “As the world’s number one @bridgerton Stan does @KimKardashian know that the Kardashians were a massive inspiration for the Featheringtons and we talked about them all the time during our fittings? Because I feel like she should know this.”

As it turns out, Kim pounced upon the open invitation to gush about her new obsession — but, in the process, spoiled one of the biggest twists of the show.

Lady W — aka Lady Whistledown, London’s biggest gossip monger who moves the series along with her astute observations about the budding romances popping up around London — is revealed in the last episode to be none other than the often-overlooked Penelope.

Characters, including the Queen of England, spent the first season trying to unmask the Julie Andrews-voiced Whistledown, but constantly failed.

As for whether or not Kim will be able to crash a future Bridgerton fitting, Coughlan told the reality star in a follow up tweet, “We would love to have you!”

She also revealed that Kim has always been a part of the series, adding that the corset she wore on set was designed by acclaimed corsetmaker Mr. Pearl, who designed Kim’s Met Gala look before working on Bridgerton.