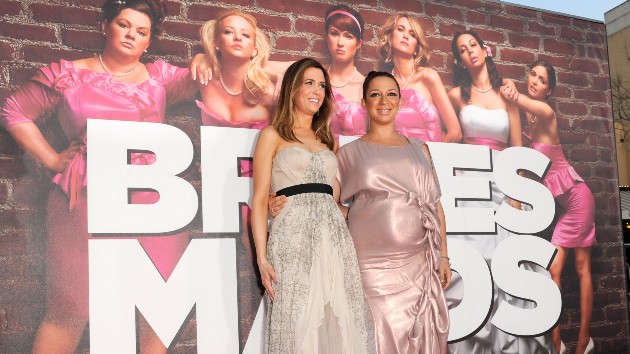 5. Bridesmaids was written by Kristen Wiig and her longtime friend, Annie Mumolo. They wrote it after Judd Apatow, who cast Wiig in his 2007 film Knocked Up, asked her if she had any movie ideas.

4. Rebel Wilson auditioned for the role of Megan, which eventually went to Melissa McCarthy. But she impressed Apatow and director Paul Feig so much that they cast her as Wiig’s roommate Brynn — it was Rebel’s first appearance in an American production.

3. Bridesmaids was a hit at the box office and with critics. It currently holds a 90% fresh rating on RottenTomatoes.com, and is Judd Apatow’s top-grossing production to date, with box office receipts of more than $288 million.

2. Among its many accolades, Bridesmaids earned two Oscar nominations: Melissa McCarthy for Best Supporting Actress, and Wiig and Mumolo for Best Original Screenplay.

1. Bridesmaids is still the highest-grossing R-rated female-led comedy of all time in the U.S. But the movie’s raunchiest scene – let’s call it the “food poisoning sequence”– wasn’t actually in the script.  Wiig and Mumolo came up with the idea during production, when Apatow and Feig encouraged them to add some crazy physical comedy.

“The Royal Family is in crisis”: Netflix drops trailer to ‘The Crown’ season five

Remy Ma returns for VH1’s ‘My True Crime Story’ season 2, loves all the “twists and turns”