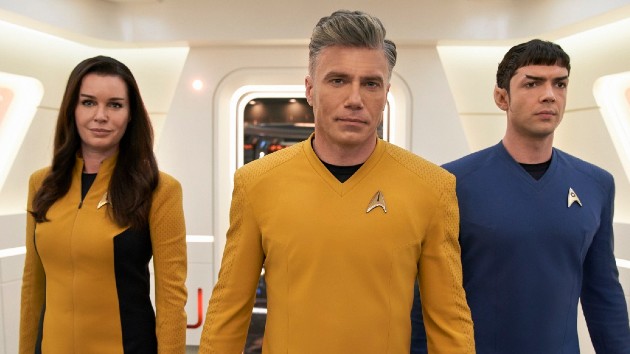 Stardate: October 13th, 2021: Anson Mount is recording one of the most legendary monologues in pop culture: The opening to the original Star Trek series, famously voiced by William Shatner. The Star Trek: Strange New Worlds star, who plays Captain Kirk’s predecessor, Captain Christopher Pike, is having a moment.

“At one point, I said ‘Guys…we’re going to remember this moment for the rest of our lives,"” he tells ABC Audio. That’s when the date, and the Blue Origin launch come into the picture. “And I realized of course…William Shatner is in orbit right now! I was like, oh man. Don’t ever try to outdo Shatner!”

Talk about living up to expectations. The Paramount+ show, set a decade before Captain Kirk takes command of the Starship Enterprise, is rich in Star Trek history and lore, showcasing new and classic characters like Mister Spock, played by Ethan Peck.

“I feel a huge amount of pressure to do this properly,” Peck tells ABC Audio, referring to the legacy of Leonard Nimoy, who played Spock for almost 50 years. “Because it is such an iconic character not just in Star Trek, but I think in television history. It’s forced me to grow personally.”

Rebecca Romijn — who stars as Pike’s Number One, Una Chin-Riley — echoes the sentiment. “You feel that pressure, you want to make sure you’re not letting anybody down,” the X-Men star says, telling ABC Audio the Trek franchise is in good hands when it comes to this outing.

“We ask a lot of questions, we don’t want to get anything wrong,” she says. “Pronunciation is always a big thing with our dialogue! But yeah, I would say I feel like a caretaker first and foremost.”