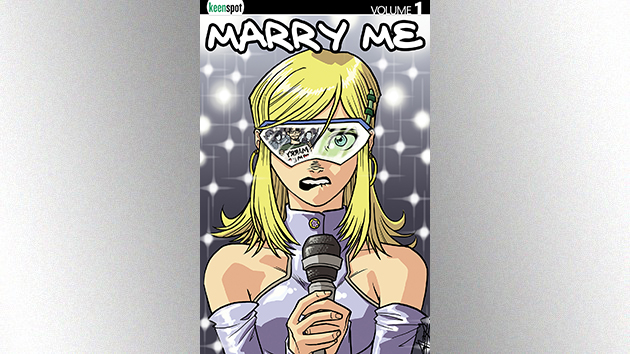 Bobby Crosby had an idea in 2001 when watching a televised concert and seeing fans holding up signs asking the singer to marry them: What would happen if that worked?  That, he says, became the basis for his webcomic Marry Me, now a movie starring Jennifer Lopez and Owen Wilson.

Marry Me debuted February 14, 2007, and Crosby tells ABC Audio he knew his story had movie potential — the “early URL” was MarryMeMovie.com — because “there was always a great reaction” when people heard the plot. “They could just see the movie.”

Crosby adds he “didn’t shop” Marry Me to studios: they “came to me.” He admits, “Early on, I was really picky,” rejecting pitches that took too many liberties, such as in 2009 when Nicolas Cage wanted Justin Timberlake to play the role that eventually went to Lopez. Crosby felt the story “worked better with a female singer.”

Crosby credits Transformers writer John Rogers for getting the ball rolling after “walking by my San Diego Comic-Con booth in 2008 or 2009… and [saying] ‘Hey, what’s this?"”  Rogers would check in periodically on Marry Me’s availability after that and he asked to option it “in late 2012.”  Soon enough, “J. Lo became interested” and the rest is history.

Rogers wrote the Marry Me screenplay and, although it deviates from “the original concept” — for example the main characters were aged up and renamed — Crosby is “glad” the journey is complete.

“A lot of stories are just remakes. And I’m glad [this movie] is based on something… A somewhat obscure webcomic,” he said. “It feels a lot more original than most movies Hollywood is making nowadays. So I like that… especially that it’s mine.”

Marry Me debuted in theaters over the weekend, grossing $8 million for a third-place finish.