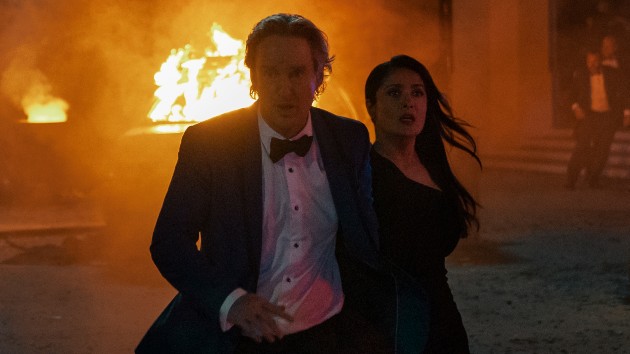 (NEW YORK) — As you might guess, it takes a lot of work to get Salma Hayek to look ugly. That was the takeaway with ABC Audio’s chat with the 54-year-old stunner who stars opposite Owen Wilson in the new Amazon Prime film, Bliss.

The movie has Wilson playing a depressed working stiff who is convinced by Hayek’s character that the real world is just a simulation projected by cutting-edge technology that she created.  Or is the whole thing just a drug-addled fantasy?

The film has the pair crossing back and forth between an “ugly” world — that is, the one we live in — and the postcard-perfect “real” one, which was sumptuously shot in stunning Croatia.

The actors’ appearance also reflects the two worlds: both performers are essentially homeless in the “ugly” world, and their appearance reflects that, while in the scenes set in the glamorous “real” world, they’re red-carpet ready.

“I found it kind of easier to inhabit the what we called the ugly world, because that was just, yeah, a lot less time in hair and makeup and you just kind of roll out,” Wilson admitted to ABC Audio.

But Hayek had a different take. “I’m sorry, I don’t want to sound vain. I don’t want you to take this the wrong way. But actually, I would take a lot longer to get ready for the ugly world, because of the ugly hair, and the ugly makeup,” Hayek said, as Wilson laughed.

Salma says her “ugly” look, “was very specific, as you can see. And it was a production that hair and the makeup.”