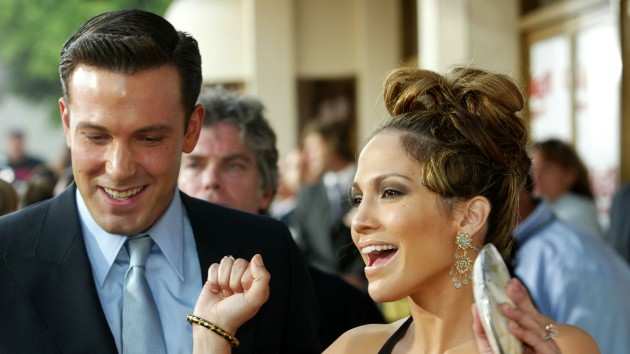 Low-rise jeans are making a comeback, but could another popular item from the 2000s — Bennifer?

Just days after they got gossipers buzzing when they met up at last Sunday’s Vax Live: The Concert to Reunite the World in Los Angeles, comes news that famously former couple Ben Affleck and Jennifer Lopez traveled to Montana together for a party.

This news comes, of course, on the heels of Lopez’ split from Alex Rodriguez.

An insider tells Page Six of Ben and J. Lo, “They are friends … they’ve never not been,” evidenced by reports Ben reportedly visited Jen’s L.A. mansion three times since she returned from the Dominican Republic where she was filming Shotgun Wedding with Josh Duhamel.

Ben and Jen met in July 2002 on the set of Gigli, but their subsequent relationship became the most lasting legacy of that box office bomb: the pair saw their names combined into Bennifer, and even saw Affleck give Lopez a 6.1-carat engagement ring in 2003.

They nearly made it to their 2003 wedding, which was postponed, and then the pair ultimately split in January of 2004.

Lopez later referred to breaking up with Ben her “first big heartbreak.”

Whether the pair are rekindling things remains to be seen. One thing’s fairly certain: they’re not meeting about Gigli 2.