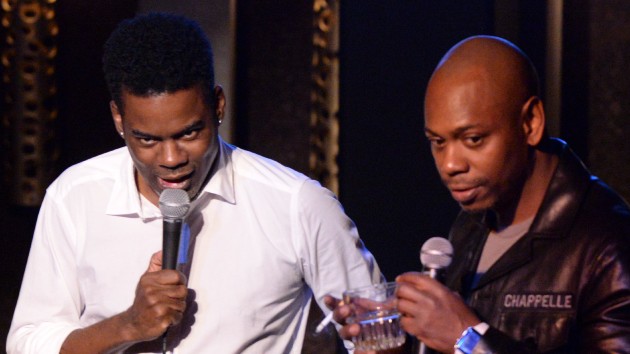 (NOTE LANGUAGE) At an exclusive performance at The Comedy Store in Los Angeles Thursday night, Dave Chappelle unpacked the onstage attack that happened during one of his shows Tuesday evening.

At one point, Dave was joined onstage by someone who also knows something about getting assaulted on stage: Chris Rock.

According to The Hollywood Reporter, Chappelle started solo, explaining that the incident, for which 23-year-old Isiah Lee was arrested, left the comedian showered with support. Dave said his teenage son hugged him after the attack and said he loved him.

Dave mentioned those who’d reached out to him after the incident, including Louis C.K., who’s continued to enjoy Chappelle’s support after the Emmy-winning comedian was embroiled in a sexual misconduct scandal.

After flying solo, Dave welcomed Rock to sit beside him, and they compared notes on their respective on-stage incidents.

Rock reportedly countered by dissing Will Smith, saying “I got smacked by the softest n***a that ever rapped.”

Chappelle also revealed he felt he “had” to meet his alleged assailant to learn his motivation. According to THR, Dave said Lee appeared mentally ill, and the suspect admitted he attacked him to draw attention to the alleged assailant’s grandmother, who had been forced out of her Brooklyn neighborhood.

Los Angeles prosecutors have charged Lee with four misdemeanors, including battery. He’s being held on $30,000 bail.