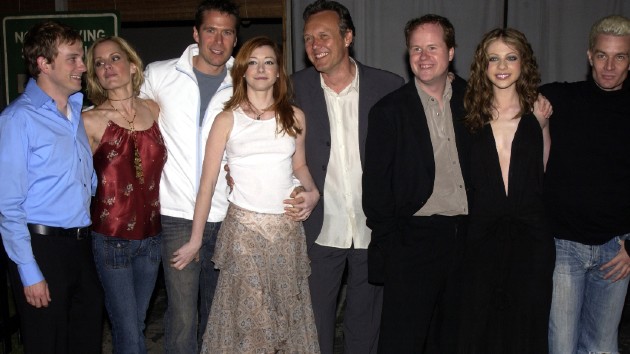 Head, center, next to Whedon with "Buffy" cast members in 2003 -- Albert L. Ortega/WireImage

Speaking on the British show This Morning, the 66-year-old actor was asked about his working relationship with the disgraced director and if he witnessed the alleged mistreatment while on set.

“I’ve been up most of the night just, just running through my memories thinking, ‘What did I miss?’ because, and this is not a man saying ‘I didn’t see it so it didn’t happen,"” Anthony said, gesturing to the bags under his eyes from the lack of sleep.

“I’m gutted.  I’m seriously gutted because one of my memories, my fondest memory about [Buffy] is the fact that it was so empowering,” the British actor expressed. “Not just the words in the script but just the family feel of the show.”

He also expressed sympathy to his former cast mates who were allegedly mistreated by the director, adding, “I’m really sad that if people went through these experiences… I was sort of like a father figure.”

Speaking about the allegations from Charisma Carpenter, Michelle Trachtenberg and Sarah Michelle Gellar, Anthony was admittedly uncomfortable that he “didn’t know this was going on” and that he wished “someone would have come to me” so he could have helped in some way.

He also spoke of the highs and lows while working on television, stating,”If you’re all there for a long time, people lose their tempers” and brought up the recently incident of Tom Cruise who was secretly recorded ranting at several crew members for not following COVID-19 social distancing guidelines.

Anthony played Rupert Giles on all seven seasons of Buffy the Vampire Slayer, which ran from 1997 to 2003.

Nick Cannon is turning “pain into purpose” with new foundation in honor of his late son, Zen