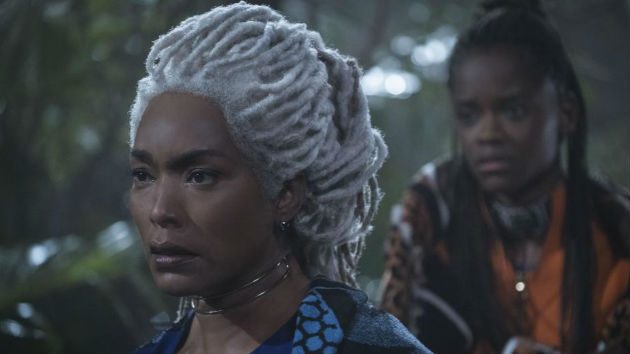 Angela Bassett, who played Chadwick Boseman‘s onscreen mother in Black Panther, wasn’t able to reveal much about the movie’s upcoming sequel, Wakanda Forever, but did promise that the film will honor the late actor.

Speaking with Entertainment Tonight, Bassett — who plays Ramonda, the mother of Boseman’s character, King T’Challa, aka Black Panther — revealed just how much work and detail is being poured into the sequel, the production of which has just begun.

“There have been about five incarnations of the script and I hear another one’s coming,” she disclosed.  Because of the current fluid state of the plot, Bassett said of the movie, “I don’t know what it’s going to look like at all.”

However, Bassett assured fans the film will honor Boseman.

“Of course, with our dear king going on to glory, a lot of things had to be shifted and changed, so thankfully, Ryan [Coogler] and Joe Robert Cole, they’re just such masterful storytellers that they’ve found a way into this world,” Bassett promised. “And, hopefully it will be satisfying, I think, for the fans and it will be honorable of our Chad. We love our king.”

Marvel Studios President Kevin Feige announced last year that the role of T’Challa would not be recast following Boseman’s death in August at age 43 after a private battle with cancer.  Instead, Feige vowed Wakanda Forever would focus on “furthering the mythology and the inspiration of Wakanda.”

The sequel is slated to premiere in theaters a year from today — July 8, 2022.

In Brief: ‘Joker’ sequel gets a release date; ‘Days’ moving off NBC to Peacock, and more

‘Shades of Grey’: Ellen Pompeo will only appear in 8 episodes of ‘Grey’s Anatomy’ new season

One “giant leap for lambkind”: ‘Shaun the Sheep’ will blast off on moon mission

Everybody back for ‘Nobody’ sequel, director says