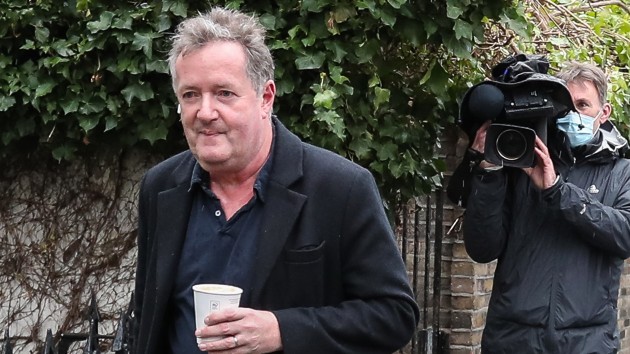 Piers Morgan is, as usual, not standing quietly by after he left Good Morning Britain in the wake of his reaction to the Meghan Markle and Prince Harry interview with Oprah Winfrey.

He’s revealed to Extra that he and his family have weathered “disgusting” death threats after his exit, and received support from the Royals he defended.

Morgan had challenged the claims Markle made in the much-hyped CBS sit-down, like her saying she had to Google Prince Harry because she didn’t know anything about him, and that she was so depressed about the abuse she said she suffered as duchess that she contemplated suicide.

Morgan’s opinions led to Sharon Osbourne leaving The Talk for defending his right to make them, as co-host Sheryl Underwood said they had “racist implications.”

To Extra’s Billy Bush Tuesday night, Morgan reiterated of Markle, “I don’t give a damn about her skin color, I do care about the veracity of what she was saying. And I do believe Sheryl Underwood should be the one leaving The Talk, for falsely accusing me of racism.”

He called “disgusting” the death threats his family has received from “so-called liberals,” and revealed he’s gotten messages of support from Osbourne and also “on behalf of the Royal Family.”

He added, “I’m not going to go into who it was, but I would say there was gratitude that somebody was standing up for them.”

Morgan also said if he could have done anything differently, he wouldn’t have walked off the Good Morning Britain set, adding most Americans didn’t realize he actually returned to finish his segments before quitting.

“Nothing I said about Meghan Markle is either racist or racially motivated,” Piers said. “I’ve been very critical of Prince Harry, and last time I checked, he is white. I find this narrative deeply offensive.”