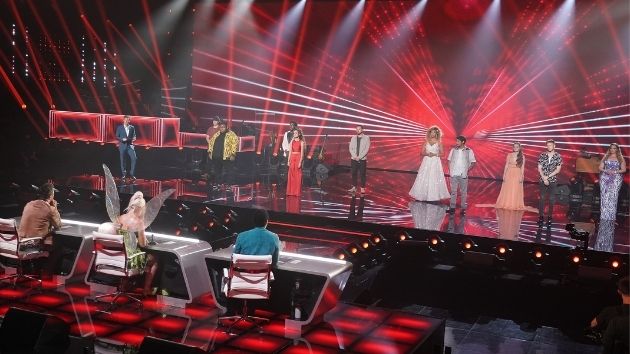 There was magic in the air during Sunday night’s American Idol because, well, it was Disney night!

Back to offer up their commentary on the performances were the judges — Katy Perry, who stunned dressed up as Tinkerbell, Lionel Richie, and Luke Bryan.

The show opened up with a grand performance of “A Whole New World” by Descendants alum Sofia Carson and the Top 9 contestants. After that, host Ryan Seacrest revealed that America voted Arthur Gunn, a contestant from last season, into the current competition to round out the Top 10.

After that, it was straight to business as John Stamos mentored the remaining contestants before they took the stage with their renditions of Disney classics.

Unlike previous episodes, Sunday’s American Idol featured live voting, which meant that the Top 10 was narrowed down to the Top 7 based on America’s votes that night.

Here’s where the contestants stand after Sunday’s episode.

Safe:
Caleb Kennedy: “Real Gone” from Cars
Willie Spence: “Circle of Life” from The Lion King
Casey Bishop: “When She Loved Me” from Toy Story 2
Chayce Beckham: “Baby Mine” from Dumbo
Arthur Gunn: “Remember Me” from Coco
Hunter Metts: “You’ll Be In My Heart” from Tarzan
Grace Kinstler: “Into The Unknown” from Frozen

Eliminated:
Alyssa Wray: “A Dream Is A Wish Your Heart Makes” from Cinderella
Deshawn Goncalves: “When You Wish Upon A Star” from Pinocchio
Cassandra Coleman: “Go The Distance” from Hercules

Next week is Coldplay week, meaning the remaining hopefuls who advance in the competition get the pleasure of meeting and working with the Grammy-award winning rock band before tackling one of their hit songs.