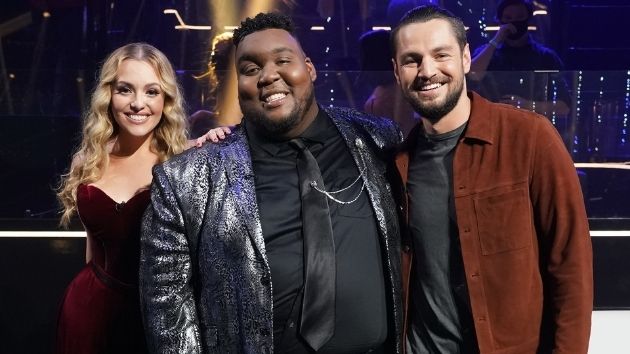 And we have a winner! During Sunday night’s grand finale, American Idol crowned Chayce Beckham as this season’s winner.  The big announcement came after a three-hour music-filled celebration.

To kick things off, the Top 3 — Grace Kinstler, Willie Spence, and Chayce — joined Macklemore to perform the hit “Can’t Hold Us.”

In addition to the collaborations, the Top 3 each took the stage for two solo performances. Their first songs were chosen by judges Katy Perry, Lionel Richie, and Luke Bryan. For Grace, they chose Céline Dion‘s “All By Myself,” while, for Willie, the three wanted to see him perform Ray Charles‘ “Georgia On My Mind.” Lastly, they challenged Chayce to sing “Blackbird” by The Beatles.

For the second round of solo performances, Grace sang Whitney Houston‘s “I Have Nothing.” Willie sang Sam Cooke‘s “A Change Is Gonna Come” and Chayce sang Chris Stapleton‘s “Fire Away.”

After the Top 3 sang their hearts out, it was time to narrow it down to the Top 2.  First to be eliminated was Grace, leaving fans to choose between Willie and Chase for their next American Idol.

As the votes poured in, so did more of the star-studded musical performances. Major artists like Cheryl Crow, Alessia Cara, Luke Combs, Leona Lewis and Fleetwood Mac each took the stage… as did the American Idol judges.

As the time dwindled down, it was time for one last performance from the Top 2. Chayce serenaded the crowd with a cover of Ed Sheeran‘s “Afterglow,” while Willie took the audience to church with a reprise of Cynthia Erivo‘s “Stand Up.”

After that, Chase was declared winner of American Idol 2021.