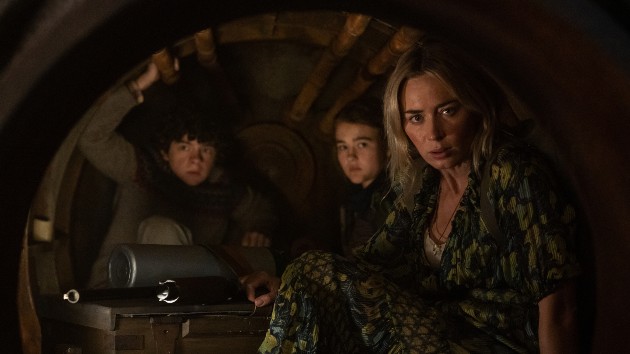 Fans will finally get a chance to see John Krasinski‘s A Quiet Place: Part II in theaters starting Friday, May 28.

Paramount has released a new trailer for the oft-pandemic-delayed movie, along with a new featurette to get fans psyched to return to the movies.

“It’s very exciting to come back to theaters to see A Quiet Place II, because it was always designed for a theatrical experience,” Krasinski says. “It’s a much bigger movie, it’s a much scarier movie [than the original],” he adds.

Emily Blunt, his wife in real life and in the film, calls the second film “inspired,” adding, “it’s a horror movie. You want to watch it in the dark, and jump and leap and gasp together. I’m really excited for you guys to see it.”

Meanwhile, Paramount has also announced a partnership with Cinemark Theatres for an opening night fan event to celebrate the movie’s debut, held at Cinemark Playa Vista in California on Thursday, May 27th, a day ahead of the movie’s nationwide debut.

The event will feature a live Q&A with director Krasinski, and comes “as part of the film’s opening week Welcome Back to Cinema fanfare,” says the studio.

Following the events of the blockbuster original, the sequel again has the surviving members of the Abbott family — played by Blunt, Millicent Simmonds, and Noah Jupe — on the run from a mysterious monster menace that hunts by sound.

But as they venture further from home, they learn those aren’t the only threats they face.