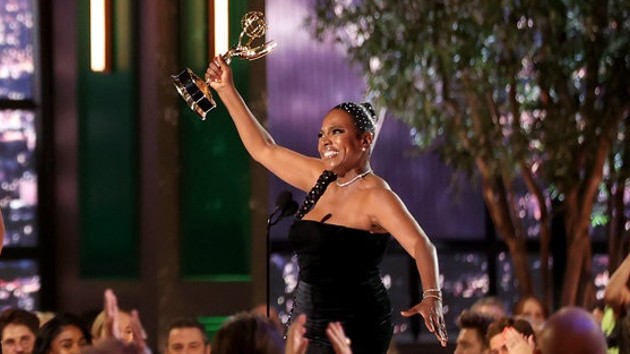 When Sheryl Lee Ralph accepted the Emmy for Outstanding Supporting Actress in a comedy series at the 2022 Emmys Monday night, the Abbott Elementary star brought the audience to their feet with her powerful acceptance speech.

The 65-year-old actress held up her trophy and belted out the opening lyrics to “Endangered Species” by Grammy-winning jazz singer Dianne Reeves. Backstage, Ralph was asked about what led her to that moment, and her answer, quoting the lyrics she sang, was equally inspirational.

“You know what? I’ve been singing that song for years because I think of myself as an artist, as a woman, especially as a woman of color, I’m an endangered species,” Ralph expressed. “But I don’t sing any victim song. I’m a woman. I’m an artist. And I know where my voice belongs.”

She added, “…there’s so many young actors, artists, even kids that think they know what they’re going to do in life. Find your voice and put it where it belongs.”

The Tony-nominated Emmy winner, who has been a veteran of the showbiz game for decades, was also asked what it meant for her to snag the trophy for the ABC sitcom at 65.

Ralph expressed, “The fact that I am here recognized after all this time as being one of the best of the best in my industry with a group of women, they are all the best. And to top it off, this particular year, tons of great TV — and for my little freshman show to break through to be seen the way it is?”