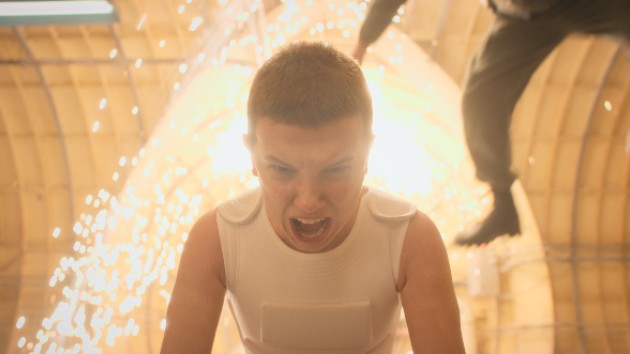 For fans of Netflix’s supernatural hit Stranger Things champing at the bit for the forthcoming fourth season, there’s finally a brand-new trailer.

Stranger Things 4 Vol. 1 premieres May 27th, and the action-packed trailer promises nothing short of an all-out war threatening the residents of Hawkins.

While we see flashbacks of Millie Bobby Brown‘s character Eleven’s early days as a child with enormous powers, she explains that despite the coming storm, she no longer has them. Paul Reiser‘s Dr. Sam Owens implores her: “A war is coming…Without you, we can’t win.”

Relocating her away from Hawkins didn’t keep Eleven and her friends from danger, as it turns out, and while Finn Wolfhard‘s Mike, Gaten Matarazzo‘s Dustin and Caleb McLaughlin‘s Lucas try to move on, a new baddie has emerged — a fearsome zombie-looking menace tied into the Upside Down.

“Your suffering is almost at an end,” it warns.

We also see David Harbour‘s Hopper still imprisoned at a Siberian internment camp, which has been overrun by demogorgons, and glimpses of Nightmare on Elm Street’s Robert Englund as Victor Creel, who lives in a creepy mansion at the center of the storm.