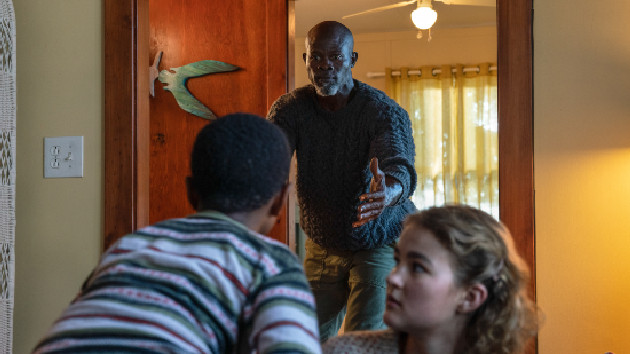 Djimon Hounsou is clearly no stranger to scary movies, having starred in multiple horror films over the course of his career. But the actor, who plays one of the survivors in the sci-fi horror thriller A Quiet Place Part II — the sequel to the 2018 hit A Quiet Place, says he’s no longer the biggest fan of the genre.

“Growing up as a young man, I was obviously drawn to scary films,” Hounsou, who’s 57, tells ABC Audio. “But I think as the time passes and you mature a little bit, you start to limit those type of films.”

“But I like making them,” he laughs. “I just don’t like watching them too much because of the age — the nervousness of having to sit through [them].”

A Quiet Place Part II picks up at end of the first film, where Emily Blunt‘s Evelyn Abbott and her children are on the road in search of a new place to hide from the killer monsters. Hounsou says getting the opportunity to watch the action-packed horror flick with fans “was quite amazing.”

“The audience was so invested in the film,” he shares. “They were so invested in moments where they were almost rooting for… you to get the creatures. I mean, it was exciting.”