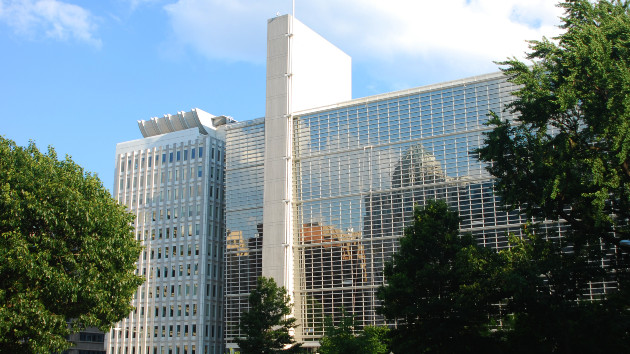 (WASHINGTON) — The annual meeting of the World Bank, held throughout this week, spotlights the organization’s work to end poverty and support international development.

This time around, however, the event coincides with a controversy that has elicited sharp criticism of the group’s climate policies and calls for the replacement of its president, David Malpass.

Last month, when questioned on stage at a New York Times event, Malpass refused to say whether the burning of fossil fuels is dangerously warming the planet.

“I’m not a scientist,” said Malpass, an appointee of former President Donald Trump.

The incident appeared to incite broader criticism of climate impact at the World Bank, which aims to address global poverty by providing free and low-cost loans for projects in developing countries.

U.S. Treasury Secretary Janet Yellen said last week that multilateral development banks — of which the World Bank is among the largest — should “evolve” to better address global challenges like climate change.

They also faulted Malpass for what they consider a failure to prioritize climate change, with some calling for him to be replaced.

“It’s a good thing this conversation with the World Bank has started,” Thanu Yakupitiyage, the head of U.S. Communications for environmental group 350.org, told ABC News. “But it can’t just end with some criticism. We’re at a critical point in the climate crisis.”

The World Bank strongly rebuked such criticism, citing progress made since Malpass was appointed in 2019.

“The World Bank Group is the largest multilateral funder of climate investments in developing countries, providing $31.7 billion in climate finance in the last year alone,” the spokesperson added.

Last year, the group released a Climate Change Action Plan, which vows to align the bank’s financing with the 2015 Paris Agreement and increase financing for climate mitigation and adaptation, among other objectives.

In addition, the World Bank committed to increase its target for the share of climate-related projects to 35% of total commitments over a 5-year period.

Critics say the climate plan came too late and lacks details on implementation of the policy shift.

“There’s virtually nothing that came from the bank between Paris and last year on what they should do on climate,” Kyle Ash, policy director at the Bank Information Center, a group that aims to reform development finance, told ABC News.

Marcelo Mena-Carrasco, a practice manager for climate analytics and research at the World Bank from 2018 to 2020 and the former Environment Minister of Chile, acknowledged the bank’s progress on climate lately, but said more needs to be done.

“Climate is one of the big priorities that the bank has — nobody can doubt that,” he told ABC News. “The problem is doing more than ever just isn’t enough anymore.”

Environmental advocates pointed to a lack of transparency surrounding World Bank climate policies. A report released by Oxfam this month found that the bank’s climate finance, totaling $17.2 billion in fiscal year 2020, could be incorrect by as much as $7 billion or about 40%.

Insufficient detail on climate projects made it impossible to account for all the funds, Oxfam said.

“Our climate co-benefits are calculated using the joint [multilateral development bank] methodology,” a World Bank spokesperson said. “We are rigorous about how we apply the methodology and only assign co-benefits for the share of financing in a given project that is directly tied to climate action.”

Mena-Carrasco, whose tenure at the World Bank overlapped with Malpass, said the presence of Malpass delayed action on climate.

“The progress wasn’t as much as you would have wanted,” he said. “You could tell that, with a Trump appointee, talking about the Paris Agreement was difficult.”

The decision on whether Malpass should stay in his position ultimately falls to the organization’s board, Mena-Carrasco said.

“I think it’s important today that we have somebody who really leads on climate,” he added.