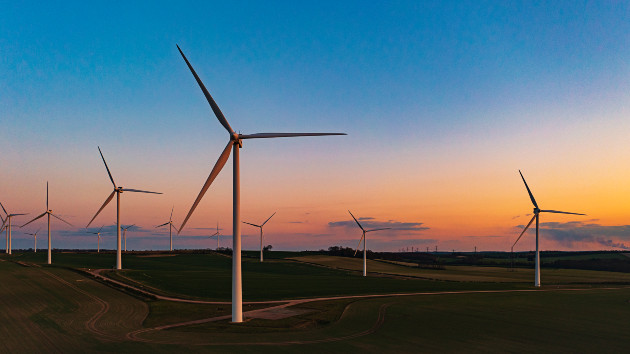 (NEW YORK) — The pace in which the world needs to transition from fossil fuels to renewable energy needs to urgently accelerate as the threat from rising global temperatures increases each day, experts say.

There is a more than 50% chance that temperatures will exceed 2 degrees Celsius unless the ambitious climate pledges made leading up to the 2021 U.N. Climate Change Conference are not strictly adhered to, a study published this month in the scientific journal Nature found.

This increase would push global temperatures past the worst-case scenario outlined in the Paris Agreement and past the point that any human civilization in history has experienced, the study warns.

Renewable energy will be instrumental in reducing the global reliance of fossil fuels, the leading cause of the greenhouse emissions that are accelerating the warming, the study says.

But fossil fuels are deeply embedded in the foundation of the world economy, experts note. The manufacturing of clothes, the growing of crops and the powering of homes all involve processes that utilize dangerous substances such as crude oil, natural gas and coal.

Most of the energy services in the world still come from fossil fuels, and global energy consumption has grown tenfold since the turn of the 20th century, Jessika Trancik, a professor of energy systems for the Massachusetts Institute of Technology who was not involved with the study, told ABC News.

Industrial manufacturing is the largest consumer of energy, at 33%, followed by transportation, residential and commercial, Trancik said.

But the current energy model is not sustainable — and will need to change quickly to mitigate the dangerous warming that could plague generations to come.

“When you turn on your lights in 30 to 40 years, if everything goes well, the energy to power your home to get your electricity on is going to be powered by renewables,” Molly Taft, a science reporter for Gizmodo, told ABC News.

The key to this lofty — but attainable — goal will be the decisions that the private sector and government make in the near future.

Fossil fuels, which contain carbon, release carbon dioxide when burned and interact with the oxygen in the atmosphere. Those greenhouse gases are the culprit for the “thermal instability” that is leading to an increase of severe weather events including drought, wildfires and rising sea levels.

Scientists have found that since the beginning of the Industrial Revolution in the 18th century atmospheric concentration of carbon dioxide has increased nearly 49% — more than the increase of the previous 20,000 years, with an average surface temperature of at least 1 degree Celsius.

The United Nations Intergovernmental Panel on Climate Change has warned that warming above 1.5 degrees Celsius, considered the conservative warming figure, will lead to further increases in those deadly extreme natural disasters.

But its not just economic livelihood that hangs in the balance as those climate-related events continue to wreak havoc. Human life will be threatened as well, Trancik said.

The doubts that people had about whether the world could transition to another energy foundation have already been disproven, Trancik said. Cost competitive and renewable energy drawn from solar and wind power have the ability to become the primary energy source, she added.

It will take a “significant societal shift” to change the course of the warming on the planet, Taft said. The U.S. is far from reaching a net-zero carbon emissions economy, but over the last 20 years innovation has driven renewable prices down and demand is up.

The majority of the responsibility lies on the industrial sector, but even something as simple as switching from gas-powered stoves to electric in homes will make a difference, Taft said.

In addition, people who live in cities can add to the conservation effort by biking, walking or taking public transportation — adjustments that will have benefits for all residents with cleaner air and less noise, Trancik said. Those who drive can switch to electric cars which will decrease the 337 million gallons of gasoline consumed by Americans per day, she added.

However, the climate fight goes far beyond individual lifestyle changes. Even the shifting away from construction materials, such as steel and concrete that make up about 20% of global carbon dioxide emissions, will be necessary.

There will also be an increased reliance on batteries in the future, Taft and Trancik said. Some will be used to store renewable energy sourced from wind and solar power. In addition, the cost of lithium ion has fallen 97% over the past three decades, making the use of batteries more affordable.

Investments in other natural resources, such as cobalt, will be needed to expand clean energy sources as well, Taft said.