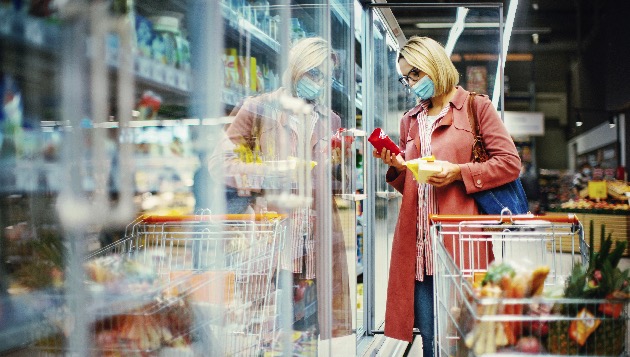 (NEW YORK) — Prices on household essentials like groceries and gas are climbing at a rapid clip, causing new financial distress for Americans right as they plan their first holiday gatherings since the rollout of a COVID-19 vaccine.

After hibernating out of sight for a generation, inflation has made an insidious and unwelcome return to the U.S. economy — fueled by supply chain snags, a shortage of workers in the service industry and pandemic-era economic policies that aimed to alleviate the financial suffering wrought by the public health crisis.

When the unemployment rate hit double-digits last March, lawmakers rallied to send stimulus money to American households and businesses shuttered for months. The Federal Reserve pulled out all the stops to keep financial markets healthy, flushing them with liquidity and easing interest rates. As the economy reopens, Americans now have a pent-up demand to consume on all the things they couldn’t for the past year — and having spent most of the year at home, many have pandemic savings to do so.

Issues with the global supply chain, coupled with struggles of major companies to find staff, however, means production is unable to keep up with the surging demand. Simplistically, this ongoing supply-demand imbalance is why economists say we are seeing prices rise right now.

Navigating inflation can cause headaches for those buying gifts for or hosting loved ones this holiday season, and can inflict further pain for households with less means to absorb higher prices on essentials.

Here is a look at where consumers are feeling the price pinch as the holidays approach, and what they can do about inflation.

Where are prices rising?

In short, prices are rising across the board, but the biggest jumps are being seen in the cost of energy, gas and used cars. Moreover, online shoppers this year likely won’t see the big holiday discounts they are used to in traditional gift items such as electronics and apparel.

Consumer prices surged at their fastest rate in more than three decades, the Labor Department said last week, reporting a 6.2% jump over the last 12 months in its consumer price index. This was the largest one-year increase since November 1990 for the index, which tracks price stickers on a market basket of everyday goods and services.

Breaking the government’s data down further indicates that the overall price hikes were driven by large increases over the past year in the energy index (a 30% jump) and used cars and trucks index (a 26.4% spike). The gasoline index soared 49.6% over the past 12 months, and the energy services (electricity and gas) index ticked up 11.2%.

While it can be hard for some to wrap their heads around what this data on rising prices means, “It’s a big deal,” Matt Schulz, a personal finance expert and chief industry analyst at LendingTree, an online lending company, told ABC News.

“Most people’s financial margin for error is pretty tiny anyway, then when you factor in inflation, an already dicey situation gets to be even more so,” Schulz said. “When you’re making that budget for your holiday spending, it’s important that you don’t just take your budget from last year and move it forward.”

Americans will likely “see a lot of inflation in things that are really close to home,” Connel Fullenkamp, a professor and director of undergraduate studies at Duke University’s Department of Economics, told ABC News.

“We’ve already seen a lot of inflation at the gas pump,” he said. And as the weather chills, he predicted, “We’re definitely going to see it in the price of heating this winter.”

The inflation we’re seeing now is especially sneaky and unpredictable, Fullenkamp added, because of all the issues contributing to it this year from many different angles.

“I think people are going to be surprised occasionally by big price hikes in certain types of items, especially ones that have been affected by the supply chain issues that a lot of companies are having,” Fullenkamp said. “And those are frankly pretty hard to predict, because for some companies it’s parts that they can’t get, and for some companies, it’s just the cost of shipping, so it’s really going to be difficult to predict, but it is definitely going to cause some sticker shock among holiday shoppers.”

How will inflation impact Thanksgiving plans?

As for how inflation is expected to affect Thanksgiving celebrations, Agriculture Secretary Tom Vilsack said that Americans should expect Turkey Day staples to be up 5% in price compared to last year.

Overall, this means the cost of “large” turkeys “will only cost $1 dollar more than last year,” Vilsack said in a statement Wednesday.

Consumers should keep these figures in mind as they plan their Thanksgiving menus and celebrations. And with gas prices rising at among the fastest rates, people should also factor that into their travel plans.

“If you’re planning on doing a road trip during the holiday season, gas is probably going to be a good bit more expensive than it was last year and that’s a big deal, especially if you’re traveling a good distance to get to grandma’s house,” Schulz said.

What about online deals on Black Friday or Cyber Monday?

Data compiled by Adobe Digital indicates that holiday shoppers likely won’t see the Black Friday or Cyber Monday deals they are used to in the past while shopping online for gifts this year.

“Consumers are now seeing a double hit to their pocketbooks, with everyday expenses like rent and gas rising, while the big holiday shopping season is going to get more expensive,” Vivek Pandya, the lead analyst at Adobe Digital Insights, said in a statement Thursday. “After 17 consecutive months of online inflation, we are entering a new normal in the digital economy.”

Online prices were up 1.9% year-over-year in October, according to Adobe’s Digital Price Index released Thursday. For comparison, prices in October 2019 were down 6.6% year-over-year going into the holiday season. In early November, discount levels for electronics were at 8.7%, the Adobe data indicates, well below the 13.2% discount level at the same point last year.

The Adobe Digital Price Index reveals that in all the 18 categories tracked, all but one (books) saw higher prices online this year when compared to the historical averages. Persistent supply chain challenges may be partly to blame, the Adobe researchers say, as consumers saw over 2 billion “out-of-stock” messages while online shopping in October.

All of this is important to keep in mind so Americans aren’t surprised by their credit card bills at the end of the month, experts say.

What can Americans do to protect themselves from inflation this holiday season?

As Americans look forward to celebrating the holidays with their families and friends again this year, experts say it is more crucial than ever to budget, plan and be as thoughtful as possible with purchases. While small increases in everyday items can seem manageable or ignorable, this is one of the biggest dangers of inflation that economists urge Americans to keep their eyes on.

Many Americans now are too young to remember the pain and uncertainty inflation wreaked on the economy in the 1970s, when it snowballed out of control, eating away at the value of savings before a painful correction that led to double-digit unemployment rates in the early 1980s. While policymakers are better-equipped to respond to inflation now and prices are rising under very different circumstances than before, many consumers a generation later are having trouble grasping inflation’s risks.

“I’m in my upper 40s and I don’t ever remember inflation. I was tiny during the gas shortages of the late ’70s and all that,” Schulz told ABC News. “It’s just important to understand that you’re not going to be able to necessarily predict what individual things get more expensive or by how much.”

“The best thing that you can do is just create your budget and assume a certain amount of increase, and just assume that everything that you buy is going to be a little bit more expensive,” he said. “If you end up overshooting, then that’s great, maybe you’ll end up having extra money at the end of the month.”

“But the danger in a time of inflation is when people think that it’s not going to affect them as much as it does, and they find themselves short at the end of the month more before that paycheck comes in,” Schulz added.

Now it is more important than ever to keep close track of how much money is coming in and going out of your household each month, Schulz said, and practice financial planning and building up a rainy day fund to protect as much as possible from unexpected price increases.

Duke’s Fullenkamp added that the new generation of Americans “just don’t have a good feel for how relentless and kind of sneaky inflation is.”

“I think people who haven’t experienced it don’t really have a good feel for how much it can really drive prices up if you let it go long enough,” Fullenkamp said. “That’s the thing that is most threatening to the individual budgets and spending, you take your eye off that ball for very long and then you’ll always be surprised, and in a really bad way, because prices keep going up.”

“One of the things that is most dangerous about inflation is it’s just so darn insidious,” he added. “Once it gets into the system — it does really, eventually, percolate through to everything.”

This is why planning ahead of time and sticking to a budget can help protect Americans from financial pain down the line as inflation sets in.

“Any holiday shopping season, impulse buying is what gets you in trouble,” Schulz said. “If you can take the time to make that list and check it twice, and shop around to look for the best deal that you can get on things, it’s as important this year as ever since we’ve seen prices increase.”

Schulz said it might also be worth looking into things like credit card reward offers if you know you are going to spend a lot this season, adding, “Obviously, you have to use the card wisely, and not just see it as a reason to go crazy spending.”

Fullenkamp noted that the more you can gather information ahead of time and comparison shop, the better. He also recommends keeping an eye on online subscription services that many Americans flocked to during the e-commerce boom of the pandemic, saying, “A lot of people aren’t paying a lot of attention before they buy stuff, and they’re getting shocked after the fact.”

Looking beyond consumerism this holiday season, families who are going to be hit hardest by inflation overall are those living paycheck-to-paycheck or without the extra funds to absorb even slightly higher prices on household essentials. But even for those with savings stashed away, the value of cash will start to erode as a result of inflation, so storing investments in things like high-interest savings accounts, money market mutual funds and inflation-protected bonds could help provide some protection.

Meanwhile, while the stock market historically has responded negatively to inflation — in large part due to uncertainty among investors and other macroeconomic factors — experts say it has also been a good vehicle for long-term investing for those who don’t need to touch their money for a few decades or until retirement.

Finally, as inflation lingers and drives up the prices of some items faster than others, Fullenkamp said consumers should not assume that the cheapest stores during times of low-inflation will still be offering the best prices.

“We might see a return to the to the good old days of more comparison shopping,” Fullenkamp said. “That’s really the best thing to do — is to make sure make sure you’re familiar with what the prices are going to be before you go out and buy.”

What does the OPEC+ oil cut mean for US gas prices?

How to secure last-minute deals for holiday travel